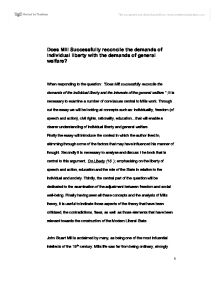 Does Mill Successfully reconcile the demands of individual liberty with the demands of general welfare? When responding to the question: "Does Mill successfully reconcile the demands of the individual liberty and the interests of the general welfare"; it is necessary to examine a number of core issues central to Mills work. Through out the essay we will be looking at concepts such as: individuality, freedom (of speech and action), civil rights, rationality, education...that will enable a clearer understanding of individual liberty and general welfare. Firstly the essay will introduce the context in which the author lived in, skimming through some of the factors that may have influenced his manner of thought. Secondly it is necessary to analyse and discuss the book that is central to this argument, On Liberty (18 ); emphasising on the liberty of speech and action, education and the role of the State in relation to the individual and society. Thirdly, the central part of the question will be dedicated to the examination of the adjustment between freedom and social well-being. Finally having seen all these concepts and the analysis of Mills theory, it is useful to indicate those aspects of the theory that have been criticised, the contradictions, flaws, as well as those elements that have been relevant towards the construction of the Modern Liberal State. John Stuart Mill is acclaimed by many, as being one of the most influential intellects of the 19th century. Mills life was far from being ordinary, strongly influenced by his father James Mill and Jeremy Bentham1; he grew up in Victorian England2 in somewhat a humble environment. ...read more.

corn dealers were the cause of famine or that private property was theft, his opinion should be protected in the name of freedom and individuality. In the moment the opinion was being diffused, inciting society to act against the corn dealers and private property, the opinion would be encroaching on others liberty therefore should be silenced. Acts that are injurious to others should receive a totally different treatment: "Encroachment on their rights; infliction them of any loss or damage, not justified by his own rights; falsehood or duplicity o fin dealing with them; unfair or ungenerous use of advantages over them; even selfish abstinence of defending them against injury- these are fit objects of moral reprobation, and in grave cases moral retribution and punishment" (p93 Gray). This will also be subject of criticism when seeing Mills definition of the States role in society. Happiness plays a central part in the rights of action, this is where Utilitarism appears. Utilitarism is a theory that amongst other things is based on the presumption that human beings should act in consequence with what will offer them the most happiness. In On Utility happiness is measured in units, therefore for example: a person that would indulge in the activities of onanism and self gratification would acquire less units of happiness than another person that would seek pleasure through altruism as the quality of happiness is greater. If we should identify with the first case Mill believes, that Society is in the position to express its disapproval, this to certain degree can be seen as education of the society over the individual. ...read more.

Though the contribution that the author makes towards natural rights and the construction of "The Modern Liberal State" is not to be ignored. On Liberty develops a coherent hypothesis that highlights the importance of freedom for the creation of society; this theory should not be looked at as a guide for the construction of civilization, but merely a philosophy of what ideally society should be. Therefore it can be said that Mill manages to successfully cut out the pieces, even though does not manage to fit them together to form a new structure. 1 Jeremy Bentham: founder of Utilitism, and a central figure in British 19th century legal system. 2 Victorian England suffered from a high degree of conformity in society both formally and informally. 3A strong criticism on Calvinism can be found in chapter III of On liberty. 4 It is necessary to acknowledge hat Mill had a co-author, this was his wife Harriet Taylor. 5 Mill does mention some exceptions when acts are related to close relatives and friends 6 Mill believed, that men were under censorship, and living under unquestionable principles. Though he also admitted, that the constant revision of principles was a difficult talsk 7 Even though Mill is not referring directly to the State, but to the government, we understand that the government is the institution that manages the State affairs 8 This is another problem that arises with the compatibility of the theory of Utility and the theory of liberty. In On Utility there is a certain justification for the limitation of liberty in order to pursuit happiness 9 The strongest critiques were from within the liberal movement: Bagehot, Goldwin Smith, and JF Stephen... ?? ?? ?? ?? 1 ...read more.