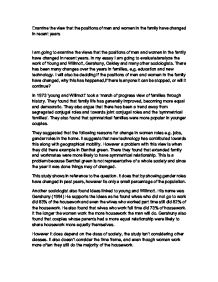 The study shows reference to the question as in the 1950's the women were still doing the majority of the housework. However nowadays there are a higher percentage of males in the domestic role and it isn't necessarily the stereotypical family anymore. However, some sociologists like Oakley argue with these views. Oakley said that even thought young and willmott found men do some housework, that they could only be taking the children to school or serving breakfast once a week. The study was supported with research carried out by Oakley. Oakley said doesn't believe in symmetrical families. She took out a study and found that only 15% of husbands had a high level of participation in the housework and only 25% had a high level of participants of childcare. On the other hand there was research in years later that prove Oakley wrong. For example Mary Bolton found that only 20% of husbands had a major role in childcare. ...read more.

These idea serve to evaluate Young and Wimott claim as it is saying (Dual burden) that even though the women work they still do the most childcare and housework, as young and wilmott said. Also Gershuny partly agrees with young and wilmott along with Rosemary crompton (1997). This is useful to the question as it is saying how the gender roles have changed in recent years and its the idea that the women still does the most domestic work. Overall I can say that the roles and males and females in a family have changed over the recent years. This is mainly because of Young and Wilmotts ideas and the fact that many other sociologists have agreed with him. There has been many factors which has led to the changes for example many women are now deciding to take the males role, e.g. go to the army. It maybe said now that the typical family (male goes out to work while women looks after children) is disappearing from our society. And maybe its time to accept that these changes were continue in the near future. ...read more.