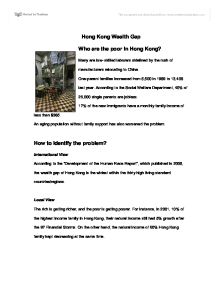 Hong Kong Wealth Gap Who are the poor in Hong Kong? Many are low- skilled laborers sidelined by the rush of manufacturers relocating to China. One-parent families increased from 5,500 in 1989 to 13,408 last year. According to the Social Welfare Department, 40% of 26,000 single parents are jobless. 17% of the new immigrants have a monthly family income of less than $385. An aging population without family support has also worsened the problem. How to identify the problem? International View According to the "Development of the Human Race Report", which published in 2005, the wealth gap of Hong Kong is the widest within the thirty high living standard countries/regions. Local View The rich is getting richer, and the poor is getting poorer. For instance, in 2001, 10% of the highest income family in Hong Kong, their natural income still had 5% growth after the 97 Financial Storms. On the other hand, the natural income of 60% Hong Kong family kept decreasing at the same time. Sometime, the wealth gap problem is a type of circulation. For example, some poor is living in poverty life because he/she had low educational level and he/she now cannot afford the education fee for their children, when the children grow up, they will remain poor or even poorer. ...read more.

Income disparity between high-income and low-income is widening. Causes Threatened by wealth gap, a solution is needed. However, to solve the problem efficiently, causes of the problem must be identified. According to the most popular saying, wealth gap started widening since 1940s, the time of the Chinese Civil War. After that, a series of incident has happened, which causes the widening of the wealth gap. In 1940s, when the Chinese civil War broke out, many refugees from mainland China escaped to Hong Kong. On the other hand, a certain amount of Capitalists where afraid of new Communism, and hence went to Hong Kong with their capital and knowledge. As a result, the rich and the poor were separated much more firmly into two classes. And that's the beginning of the problem. In 1970s, Hong Kong turned herself into an international financial center from a manufacturing center. Therefore, labor-intensive industries didn't exist anymore, but has changed into technology and knowledge-based economy. With the essential need of high-level technology, less unskilled labors were needed so lots of people lost their jobs, while the educated ones had great opportunities on work. ...read more.

The job of the leader is to persuade the rich to do so willingly. On the other hand, as the poor gets poorer, the worsening problem will eventually lead to social unrest or other unpredictable problems, the leader has to convince the poor and guarantee their living, to ensure the society stableness. If he can reduce the complaints and blames from society and keep a balance between the rich and the poor, then he is exactly the kind of leader that this problem requires. Reference ???. ???? - ?????:???????. Hong Kong: Ming Pao, 2004. Hong Kong 2005. Hong Kong: Information Services Department of the Hong Kong SAR Government, 2005. Karen Balkin. Poverty. U.S.A: Greenhaven Press. 2004. Video 'Hong Kong's Wealth Not Shared All Citizens.' Hong Kong: VOA story, 2007 Magazine Article YULANDA CHUNG. ."IAWEEK: THE NATIONS: HONG KONG: A WEALTH OF PROBLEMS: Growing poverty has become a time bomb. "Asiaweek" Nov 10, 2000:Pg. 1 E-resource Economic Analysis Division. Analysis of income disparity to LegCo. 16 MAR 07. Legislative Council. 22 JUL 07. <http://www.legco.gov.hk/yr06-07/english/fc/fc/papers/fc0301fc-46-e.pdf> Hong Kong Annual Digest of Statistics. Census and Statistics Department. Hong Kong: Government Printer. Various years. Website Man Ki Kwok. "M-shaped Phenomenon." Business Weekly. 16 OCT 06. Business Weekly a division of Cite Publishing Ltd. 20 JUL 07. <http://www.businessweekly.com.tw/article.php?id=23442&p=1> ?? ?? ?? ?? ...read more.