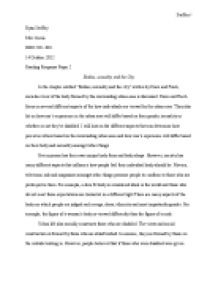 In the chapter entitled Bodies, sexuality and the city written by Knox and Pinch, societies view of the body formed by the surrounding urban area is discussed

﻿Steffey Ryan Steffey Mrs. Carrie GEO 220 - 001 14 October 2012 Reading Response Paper 2 Bodies, sexuality and the City In the chapter entitled ?Bodies, sexuality and the city? written by Knox and Pinch, societies view of the body formed by the surrounding urban area is discussed. Knox and Pinch focus on several different aspects of the how individuals are viewed by the urban area. They also hit on how one?s experience in the urban area will differ based on their gender, sexuality or whether or not they?re disabled. I will hint on the different aspects that can determine how perceives others based on the surrounding urban area and how one?s experience will differ based on their body and sexuality amongst other things. ...read more.

In essence, they are formed by those on the outside looking in. However, people believed that if those who were disabled were given certain things that would help them with their disability then it wouldn?t be considered a disability at all. The first social constructions were formed based on the views people had of those who were blind. The urban setting is not sound for those with disabilities due to stairs, high curbs along with other things that would make it hard to be mobile for those who are disabled. With such limited accessibility within the city its makes it difficult, nearly impossible, for the disabled to be full citizens. However, now cities are much more serious when dealing with the disabled making urban areas much more accessible for them. ...read more.

In the past, these roles have been advantageous to males making the areas heteropatriarchal environments. By hitting on these points it is easy to see that there are several different aspects that determine one?s experience in the city. Gender would play the most important role due to the fact that the socially accepted roles for males compared to females are most apparent. However, comparing those who are able-bodied to those who are disabled also have a large effect on the experience of said individual. Also, one?s sexuality can greatly define their experience. Regardless that society has become more welcoming to alternate lifestyles there are still plenty of people who view it as not being normal. Society exerts a large amount of pressure on how one is to live within the city if they want to be accepted as normal. ...read more.