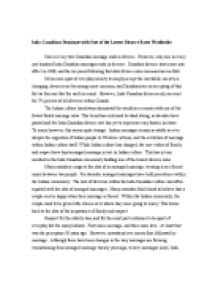 Indo-Canadians Dominate with One of the Lowest Divorce Rates Worldwide

﻿Indo-Canadians Dominate with One of the Lowest Divorce Rates Worldwide One in every two Canadian marriage ends in divorce. However, only one in every one hundred Indo-Canadian marriages ends in divorce. Canadian divorce laws came into effect in 1968, and the ten years following that date divorce rates increased seven-fold. Its become apart of everyday society to simply accept the inevitable; society is changing, divorces are becoming more common, and Canadians are as accepting of this fact as they are that the earth is round. However, Indo-Canadian divorces only account for 7% percent of all divorces within Canada. The Indian culture has always dominated the world as a country with one of the fewest failed marriage rates. This trend has continued to stand strong, as decades have passed and the Indo-Canadian divorce rate has yet to experience any drastic increase. To many however, this seems quite strange. Indian marriages remain as stable as ever despite the migration of Indian people to Western cultures, and the evolution of marriage within Indian culture itself. While Indian culture has changed, the core values of family and respect have kept arranged marriage in tact in Indian culture. This has in turn resulted in the Indo-Canadian community holding one of the lowest divorce rates. Many outsiders cringe at the idea of an arranged marriage, viewing it as a forced union between two people. ...read more.

These values are still here. As time progressed, society began to change, as did the perception of arranged marriages. Canadian society, along with many others were ruled less by traditional religious values. However, one thing that remained in tact was family values. It is these values that play a significant role in low divorce rates among Indo-Canadians. Arranged marriages now include the wishes of the bride and groom. Indo-Canadian marriages used to be dictated solely by what the parents wanted, with little room for negotiation on the couple?s behalf. As the twentieth century rolled around, this concept was changing drastically. So what exactly was the cause of this? Arranged marriages have changed a great deal over the past one hundred years. ?When I was growing up, my brother married his wife without even meeting her. This was back in the 1960?s. Now that I have children, I could not imagine forcing them to get married that way,? says mother of three, Rina Dhillion. Arranged marriages are still common within the Indo-Canadian community, however, they are not controlled by the old school definition. Nowadays, arranged marriages consist of introducing two people. The couple is given the opportunity to spend time together and get to know each other. If things don?t work out, it is on to the next. ...read more.

Firstly, family values originate from great-grandparents, grandparents, or parents. These people were raised in India, and see respect and family as being top on their list of values. This is how life always was in India, and continues to be. Therefore, when they came to Canada, and taught their children the values that are of importance to them, they taught them the importance of respect for family. This plays a significant role in divorce rates remaining low. The generations being raised in Canada are adapting to the Western lifestyle, while at the same time keeping the values of their parents and grandparents close to their heart. Divorce has, and continues to be frowned upon by many Indians. Divorce rates remain low because family values are still a high priority among Indo-Canadians. ?Marriage is a sacred union,? 32-year-old Leena Soodan, ?I am a married, East Indian female, and I could not ever think of leaving my husband. I have always been taught that family is the most important thing in the world. This will always be the case for me.? So at the end of the day what we have is a change; a change in society and a change in Indo-Canadian marriages. However, what has helped in keeping Indo-Canadian divorce rates low is the lack of change in terms of tradition. Combining important traditions and values of the Indian culture, with the modern, Canadian society only seems to be a recipe for a successful marriage. ...read more.