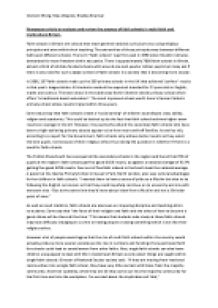 Newspaper article to evaluate and review the purpose of faith schools in multi-faith and multicultural Britain.

﻿Clement Wong, Max Albayrak, Bradley Brannan Newspaper article to evaluate and review the purpose of faith schools in multi-faith and multicultural Britain. Faith schools in Britain are schools that teach general national curriculums but using religious principles and aims within their teaching. The extremities of these principles vary between different faiths and different schools. The term ?faith schools? was first used in 1990 when Muslim institutes demanded for more freedom within education. There is approximately 7000 faith schools in Britain, almost a third of all state funded schools with around one and quarter million pupils but many ask if there is any need for such a large number of faith schools in a society that is becoming more secular. ...read more.

As well as this, according to a report for the Government, faith schools only achieve better results as they select the best pupils, not because of their religious ethos thus raising the question in whether if there is a need for faith schools. The Politics Show South has surveyed all the secondary schools in the region and found that 72% of pupils at the region's faith schools got five good GCSE results, as against a national average of 53.7% getting five good GCSE results. Four out of five faith schools in the South beat the national average. A parent at the Islamia Primary School in Queen's Park, North London, also sees cultural advantages for her children in faith schools. ...read more.

However a lot of people would agree that the rise of multi faith schools within the country would actually produce more secular societies as the rise in numbers and funding of one particular faith for schools could lead to unsettlement from other faiths. Also, single faith schools can also leave children unequipped to deal with life in mainstream Britain as only select things are taught within single faith schools. Director of National Secular society said: "If they are moving from restricted communities into a single faith school, they have very little contact with those from the majority community. And then suddenly, when they are 16 they come out into the majority community for the first time and into the workplace. I'm worried about the implications of that," ...read more.