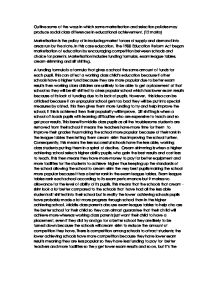 Outline some of the ways in which some marketisation and selection policies may produce social class differences in educational achievement.

Outline some of the ways in which some marketisation and selection policies may produce social class differences in educational achievement. (12 marks) Marketisation is the policy of introducing market forces of supply and demand into areas run by the state, in this case education. The 1988 Education Reform Act began marketisation of education by encouraging competition between schools and choice for parents. Marketisation includes funding formulas, exam league tables, cream-skimming and silt shifting. A funding formula is a formula that gives a school the same amount of funds for each pupil. This can affect a working class child's education because if other schools have a higher fund because they are more popular due to better exam results then working class children are unlikely to be able to get a placement at that school so they will be silt-shifted to a less popular school which has lower exam results because of its lack of funding due to its lack of pupils. However, this idea can be criticised because if an unpopular school gets too bad they will be put into special measures by ofsted, this then gives them more funding to try and help improve the school, if this is achieved then their popularity will improve. ...read more.

Exam league tables rank each school according to its exam performance but it makes no allowance for the level of ability of its pupils. This means that the schools that cream-skim look a lot better compared to the schools that have had all the less able students silt-shifted into their school but in reality the lower achieving schools pupils have probably made a lot more progress through school than in the higher achieving school. Middle class parents also use exam league tables to help choose the better school for their child so they can almost guarantee that their child will achieve more whereas working class parents just want their child to have a placement, even if they did try and go for a better school they are likely to be turned down because the schools will cream-skim to reduce the amount of competition they have. There is competition among schools to attract students; the lower achieving schools have more competition because they have lower exam results meaning they are less popular so they have less funding to pay for better teachers and more facilities so they get lower exam results and so on, but ...read more.

Geoffrey Walford's research on CTCS found that even though they intended to provide vocational education in partnership with employers and to recruit pupils from all social backgrounds, in practice they became just another route to elite education. Middle class parents became attracted to them because they were seen as the next best thing to traditional grammar school. Educational triage is process through which teachers divide students into safe cases, cases suitable for treatment, and hopeless cases and ration resources to focus on those students most likely to improve a school's test scores. This then helps schools achieve higher in their exam results and improving the popularity but in an unpopular school this is hard because they have more cases suitable for treatment and hopeless cases than in a popular school but in the same instance they have less funding to put into those pupils meaning they can't achieve as high. In conclusion it is very clear that marketisation and selection policies produce social class differences in educational achievement through funding formulas, competition, exam league tables, cream-skimming, silt-shifting and educational triage, with most resulting in the middle class child getting a better education than a working class child which then effects their future in regards to higher education and jobs. ...read more.