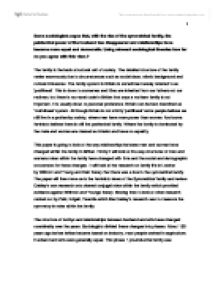 Some sociologists argue that, with the rise of the symmetrical family, the patriarchal power of the husband has disappeared and relationships have become more equal and democratic. Using relevant sociological theories how far do you agree with this view.?

Some sociologists argue that, with the rise of the symmetrical family, the patriarchal power of the husband has disappeared and relationships have become more equal and democratic. Using relevant sociological theories how far do you agree with this view.? The family is the basic structural unit of society. The detailed structure of the family varies enormously due to circumstances such as social class, ethnic background and cultural influences. The family system in Britain is sometimes loosely referred to as 'patrilineal'. This is down to surnames and titles are inherited from our fathers not our mothers, but there is no moral code in Britian that says a mothers family is not important, it is usually down to personal preference. Britain can be best described as 'multi-lineal' system. All though Britain is not strictly 'patrilineal' some people believe we still live in a patriarchy society, where men have more power than women. And some feminists believe there is still the patriarchal family. Where the family is dominated by the male and women are classed as inferior and have no equality. This paper is going to look at the way relationships between men and women have changed within the family in Britian. Firstly it will look at the way structures of men and womens roles within the family have changed with time and the social and demographic occurances for these changes. ...read more.

(Moore, 159) Now that we have briefly looked at the changes in the history of families the paper will now look at Wilmott and Young studies. They researched family life in London and found that family life in britian was becoming increasingly symmettrical. (Abbott, pg140) The family is home centered and there conjugal roles are similar. "The ideal-type symmetrical family is balanced. Both husband and wife work, each contributing to the family income. Domestic roles along with caring for children are shared." (Wilson, pg 64) The rise in Symmetrical family is down to social and demographic changes. Contraception meant women could choose to limit having children. There was better living conditions aswell which meant home was more attractive with men choosing to stay at home watching television. (Moore, pg 185). There were a number of legal changes also which some say brought women near equality to men particurly in the employment sector. There was the Equal Pay Act in 1970, s*x Discrimination Act in 1975 and Employment Protection Act also in 1975. Women gained financial independence from their husbands by working. (Wilson, pg58) Other legal changes that which could of affected men and women's relationships was the 1969 Divorce Reform Act which introduced new grounds for divorce aswell as changing the way people looked upon women who divorced. Marriage was now seen as mutual commitment rather than "legal enforceable contract" (Allan, Crow, pg 24) ...read more.

He found that women had the bulk of decision making responsibilities such as buying food, clothing and decorating whereas the men dominated important decisions such as moving home, holidays or major purchases such as a new car. His theory for this was that men usually earn more than their wife's, meaning they are financially dependant on their husbands which means they have a smaller right in decision making. From all this evidence it shows that all though women's employment opportunities have increased it has little affect on conjugal roles. It backs up the theories of Marxist and Feminists who see women's domestic labour as exploitation. Radical feminists see their biological role of childbearing as the reason for oppression by men whereas Marxists see economic power as their oppression. After looking at the above it does show that there has been a move forward to equality between men and women. It would seem there is still quite a way to go before there is real symmetry between family roles as shown by Edgell, Pahl. Yeandle and Oakley. From the studies though it does show that men are becoming more involved at home within the family and the relationship between husband and wife has greatly improved in terms of decision making, it's the roles of domestic housework which seems largely segregated. All though there is still some patriarchal power it is nothing like it once was. ?? ?? ?? ?? 1 ...read more.