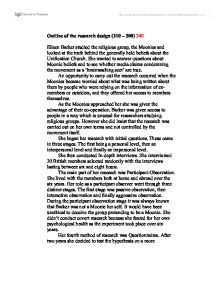 The Making of a Moonie

Outline of the research design (210 - 300) 340 Eileen Barker studied the religious group, the Moonies and looked at the truth behind the generally held beliefs about the Unification Church. She wanted to answer questions about Moonie beliefs and to see whether media claims condemning the movement as a 'brainwashing sect' are true. An opportunity to carry out the research occurred when the Moonies became worried about what was being written about them by people who were relying on the information of ex-members or outsiders, and they offered her access to members themselves. As the Moonies approached her she was given the advantage of their co-operation. Barker was given access to people in a way which is unusual for researchers studying religious groups. However she did insist that the research was carried out on her own terms and not controlled by the movement itself. She began her research with initial questions. These came in three stages. The first being a personal level, then an interpersonal level and finally an impersonal level. ...read more.

With the In-Depth Interviews Barker had an outline of what she wanted to discuss but the order of questions was flexible. Areas covered included the background of the interviewee, why and how they joined, their life in the movement and their understanding of what they were doing. Participant Observation was important. The aim of it was to gain a deeper understanding of the Moonies. The first stage of participant observation was 'passive observation'. In this stage she did very little, just watched and listened. The next stage was 'interactive observation' were she felt familiar enough with the Moonies to join in conversations without standing out. Finally the last stage was the 'aggressive stage'. This was when she felt confident enough to question some of what the Moonies believed in. As she had been there for such a long time she was able to do this without being dismissed and told she didn't understand the group. The last method was the Questionnaire to provide a sample of answers that could be looked back on and used to back up other areas of research. ...read more.

However taking in to consideration all four methods the research is not reliable. Her research was highly valid. As she used four methods over a 6 year period her findings were clearly valid. Each method backed up the findings of the other methods to ensure the findings were true and just. If she had used just the one method you couldn't be sure everything worked perfectly. Where as, if you have four methods showing similar findings the research has to be valid. She also kept a diary which aided her in translating her findings at the end of her research. With this added level of accuracy it gave her research higher validity. The research is obviously not representative. She only studied one religious group so it is not possible for the findings to be representative. Further more the findings cannot be generalised to the population as a whole as she only studied the one group. Barker's research didn't break any ethical guidelines. She was true to the participants throughout her study and didn't attempt to deceive anyone. She was open in what she was doing from the start and everyone knew that she was a sociologists and not a Moonie. ...read more.