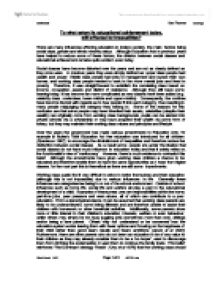 To what extent is educational achievement today, still affected by inequalities?

To what extent is educational achievement today,

There are many influences affecting education in today’s society, the main factors being social class, gender and ethnic minority status.  Although Education Acts in previous years have helped to reduce some of these factors, the division between social classes and educational achievement remains quite evident, even today.

Social classes have become distorted over the years and are not as clearly defined as they once were.  In previous years they were simply defined as: upper class people had wealth and power; middle class people had jobs in management and owned their own homes; and working class people tended to work in the more menial jobs and lived in poverty.  Therefore, it was straightforward to establish the correlating class based on income, occupation, assets and district of residence.  Although they still have some bearing today, it has become far more complicated as new classes have been added (e.g. celebrity class, underclass, lower-middle and upper-middle).  Consequently, the confines have become blurred with regards as to how people fit into each category, thus resulting in many people misjudging the category they belong to.  Some of the reasons for this confusion are that some people may have inherited their assets, celebrities (despite their wealth) can originally come from working class backgrounds, pupils can be elected into private schools via a scholarship or may have acquired their wealth via some form of lottery, but they may maintain their working class values and principles and lifestyle.

Over the years the government has made various amendments to Education Acts, for example in Butler’s 1944 Education Act free education was introduced for all children (Spartacus 1997), to encourage the diminishment of inequalities and therefore reduce the distinction between social classes.  As a result some people are under the illusion that social classes do not have much influence in education today and that it solely relies on, the functionalist’s view of ‘meritocracy’.  However, there is much evidence to contradict this belief.  Although the amendments have given working class children a chance to be educated and therefore enable them to have the same opportunities as those from higher classes, for the most part this is theoretical as there are still some impediments.

Working class pupils find it very difficult to strive to better themselves and their education (although this is not impossible) due to various influences in life.  Generally these influences are categorised as being in or out of the school environment.  Outside of school influences such as home life, social life and welfare all play a part in the educational development of a child.  Examples of these pressures are responsibilities within the home, part-time jobs, peer pressure and even abuse, all of which can contribute to a poor education.  From a stereotypical stance, it can be assumed that working class parents are likely to be underachievers, some being illiterate and are therefore unable to assist their children with homework or other beneficial activities.  Additionally, some parents show none or little interest in their children’s education, interests, welfare or even behaviour, whilst others may simply be too busy juggling jobs (sometimes more than one), siblings and/or being a lone parent.  Others may not understand or be concerned how the education system works leaving them with fewer options and focusing on the happiness of their child rather than good exam results and future ambitions (Jarvis et al 2007).  Furthermore, there are other parents who do not deem an education to be of any value to their children as they may already consider them to be a ‘no-hoper’, want to discourage them from climbing the social ladder or want them to continue the family trade.  This belief reinforces ‘The Dominant Ideology Thesis’ (Urry et al 1975) that the working class should remain working class.  Additionally, many parents are unlikely to be able to afford ‘extras’ such as school excursions, extracurricular activities, private tutors or even the correct uniform.

Other influences affecting lower class education occur within the school system.  One such reason is due to Ofsted reports and league tables causing schools to take on a business stance.  Consequently, this puts schools under extreme pressure to perform, resulting in much prejudice (consciously or subconsciously) within the classes, as teachers are encouraged to favour the higher achieving pupils to attain the best results, ultimately leaving those with difficulties behind which can subsequently lead to more unruly behaviour.  Furthermore, Special Educational Needs Children (SEN) are now being integrated into mainstream schools and the league tables do not take into consideration the affects that SEN pupils have on the statistics, as it is unlikely that they will gain any qualifications, let alone high grades.

Another factor is the child’s district of residence, as working class children are more likely to attend understaffed, underequipped, oversized and often unruly schools.  This claim is supported by a statement, in the interim report, cited in Politics.co.uk (2006) which quotes:

"The criteria for social housing all too often results in problem families being concentrated in a particular area, with access to only one school, infamously described as 'bog-standard', which then bears the total burden of the most difficult social group.  "Socially excluded households are seldom able to provide any support to their children or to the school, and it is small wonder that the 'cycle of deprivation' is repeated from one generation to the next."

Consequently, education authorities are undertaking trials in oversubscribed schools, in specific locations in England, exercising scrapping of the ‘catchment area’ in favour of a ‘lottery’ system, to give parents more options in the choice of school their children attend and to prevent middle classes dominating the top schools.  Regardless of this, many working class parents still fail to secure a place in their first choice of school and are generally still limited with their choices because of transport, expenses and available places.  It is also claimed by researchers that:

Bearing in mind the above factors it is extremely likely that the schools, incorporating a higher level of lower class pupils, will gain a disreputable reputation.  This can ultimately lead to superior teachers being discouraged from working in these schools and therefore seeking employment in higher class schools.  This then leaves the former schools with inadequately trained or unsuitable teachers leading to more unruly behaviour.  Conversely, there are a small number of teachers who rise to the challenge of educating in such schools.

Over the years, the government has introduced measures to assist in supporting underprivileged families for instance: free school meals and uniform vouchers.  However, in recent years the celebrity chef, Jamie Oliver, has brought the public’s attention to the eating habits of lower class children (inside and outside of schools), specifying that many live on inexpensive and quick meals which give the children little nutritional value, which is vital for wellbeing and mental alertness (Oliver 2006).

All of these factors can result in pupils: suffering from low self-esteem, vulnerability to bullying and peer pressure, health issues and lack of aspirations which can consequently lead to the unruly behaviour that is occurring in many schools today and this ultimately can result in a poor and severely disadvantaged education leading to disadvantaged career prospects.

In contrast to the working class, the middle class, and even more so the upper class, have many advantages over their ‘inferior’ citizens.  However, the extent of their benefits is generally determined by their wealth and how far up the class hierarchy they are positioned.  Therefore, from a stereotypical point of view, the middle to upper class tends to have the privilege of living in well-to-do areas with well maintained nurseries, primary and secondary schools near-by.  Those who do not live near a ‘suitable’ school are able to afford transport to the better establishments or are able to afford private school fees.  Pupils also benefit from luxuries such as school excursions, equipment, extra resources and private tuition.  Additionally, their schools are more likely to have a larger income as a result of their successes in league tables and Ofsted reports or tuition fees and have a greater input from parents.  These factors improve the standards of the schools including school meals, life and social skills training and smaller class sizes.  Furthermore, the parents are likely to work in a good profession including managerial positions giving them the advantage of having connections and as their children grow up they are likely to inherit these connections within the community.

However even with these facts in mind and despite the improvements by education authorities and the government it is apparent that there are still many educational inequalities in connection with social class, even in modern society.  This has been proven in many different research projects over the years and is accessible to the public (National Statistics 2004).  However, it is unlikely that we will ever overcome all inequalities but we must make every effort to lessen the gap to unite as one equal society.  Furthermore, it can be concluded that no one single factor can be attributed as the sole cause for high or low educational achievement as for the most part, they overlap each other or interconnect with each other and this is the reason the education system finds it difficult to break out of the cycle.  Additionally, all viewpoints and even statistical evidence can be misrepresentative of the true facts as they can be manipulated in favour of any class which is deemed suitable for the reporter’s research or evidence can be out of date.  To some degree everyone has to accept some element of responsibility for the low achievers and credit for the high achievers, including the pupils themselves as it is possible to overcome the barriers with the correct attitude, aptitude, determination and support.