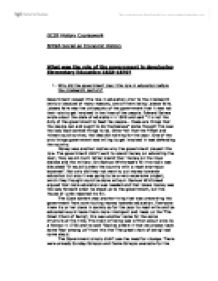 What was the role of the government in developing Elementary Education 1833-1870?

GCSE History Coursework British Social an Economic History What was the role of the government in developing Elementary Education 1833-1870? 1. Why did the government play little role in education before the nineteenth century? Government played little role in education prior to the nineteenth century because of many reasons, one of them being Laissez faire. Laissez faire was the philosophy of the government that it was not their role to get involved in the lives of the people. Edward Baines wrote about the state of education in 1846 and said "it is not the duty of the government to feed the people... these are things that the people can and ought to do themselves" some thought this was the way God wanted things to be. Other felt that the fittest and richest could survive; the idea did nothing for the poor. One of the only things government was willing to get involved in was defending the country. Money was another motive why the government played little role. The government didn't want to spend money on educating the poor, they would much rather spend their money on the royal stables and the military. On Samuel Whitbread's Bill this topic was discussed "It would burden the country with a most enormous expense". Not only did they not want to put money towards education but also it was going to be a very expensive project, which they thought could be done without. Samuel Whitbread argued that more education was needed and that raises money was the way forward when he stood up to the government, but the House of Lords rejected his Bill. The Class system was another thing that was preventing the government from contributing money towards education. ...read more.

They needed to know who to vote for because if that person won he would run the country, so they are voting for a very important matter. In the reform Act of 1867 most working class men were giving the chance to vote. This was very important link outside education because with educated voters the country has a better chance of a good and well presented Prime Minister. This would be because the men who were educated would pick by using their own knowledge to choose who they think is best to run the country. The government saw many advantages to educating the poor. One of them was that it would give them a better opportunity to get employed, as they have been educated. Therefore they wont be tempted into stealing for a living and committing other crimes. If they had a job they would be getting some money and they wouldn't need to steal. In support of educating the lower classes H.E. Strickland wrote "leaving them an easy target to numerous temptations" he is simply implying what I have said above. This had a major link outside of education because if crime was cut down by having more educated people than there wont be a need to employ as many police men which would just cost more money. The general happiness of people would be better if they weren't too likely to get robbed. Individuals also lead the way for the educating the poor. These people were known as philanthropists. Lord Shaftsbury was very much in favour in educating the poor. His interest included the provision of working class education and was chairman of the Ragged Schools Union for over forty years. ...read more.

It was set-up in Battersea with the support of the government. It was very good, because up until then the teachers were untrained and clergymen. The government from this seemed to be getting more and more involved. They were though training many teachers and collapsed. The success this achieved was part of the other successes such as the First grant and inspectors and now this. Overall a success because the government were ever so slightly taking more and more control over education. Overall there was a lot of general success. By 1870 the government had a direct role in education. They had challenged and inspired the voluntary sector to improve e.g. Church societies. Also by 1870 (or soon after) there were schools in every parish, even though it was still not compulsory. There were now enough places for everyone. Due to the introduction of the teacher training college the quality of teaching did improve. There were though still remaining problems. One of them being that going to school was still not compulsory. There was also no secondary education. One bad thing for parents was that there was still a fee to pay. This continued until 1891 when education was free. There was no national network for education. There were therefore lots of independent and isolated schools. Although there was a good quality of the teaching due to the Training College there was an insufficient amount of teachers. There was still opposition to the idea of education and to whom it should be available. And the people who were on the school board were amateurs, local worthy people that didn't know a lot about education. They didn't even have any expertise. In conclusion I feel that the government have made a good start to education but there is still more to be done. Chris Marais ...read more.