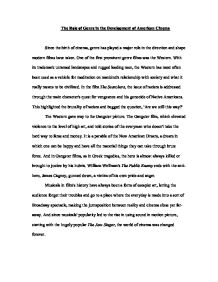 The Role of Genre In The Development of Modern American Cinema

The Role of Genre in the Development of American Cinema Since the birth of cinema, genre has played a major role in the direction and shape modern films have taken. One of the first prominent genre films was the Western. With its trademark untamed landscapes and rugged leading men, the Western has most often been used as a vehicle for meditation on mankind's relationship with society and what it really means to be civilized. In the film The Searchers, the issue of racism is addressed through the main character's quest for vengeance and his genocide of Native Americans. This highlighted the brutality of racism and begged the question, 'Are we still this way?' ...read more.

William Wellman's The Public Enemy ends with the anti-hero, James Cagney, gunned down, a victim of his own pride and anger. Musicals in film's history have always been a form of escapist art, letting the audience forget their troubles and go to a place where the everyday is made into a sort of Broadway spectacle, making the juxtaposition between reality and cinema close yet far-away. And since musicals' popularity led to the rise in using sound in motion picture, starting with the hugely popular The Jazz Singer, the world of cinema was changed forever. Science Fiction as a film genre, started out like the Gangster movies, adapted from dime novels, but quickly became a frontier on which skilled writers could make complex metaphors out of the problems and fears of the current times and put them in a new context, to reach those who would otherwise be uninvolved. ...read more.

Finally the Comedy film has been popular since the birth of film, with Charlie Chaplin's improvised form of slapstick, to Buster Keaton's deadpan in the face of absurdity. Comedies are used most often to make the audience laugh at the frustrations of modern life. But the Comedy has many sub-genres like the Screwball Comedy, which, during the Great Depression, satirized the wealthy and laid the groundwork for the Romantic Comedy, in which the lovers are put to the test and come back together in the end. Genre's role in cinema has been one that has been fading slightly in the last few years. Films of late have been mixing genres more readily that in the past and it seems that the solid, classifiable genres of the past will give way to new ones, ones that are hard if impossible to identify. ...read more.