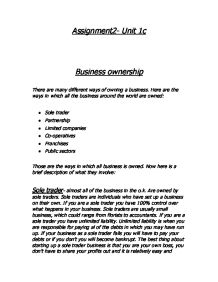 Assignment2- Unit 1c Business ownership There are many different ways of owning a business. Here are the ways in which all the business around the world are owned: * Sole trader * Partnership * Limited companies * Co-operatives * Franchises * Public sectors Those are the ways in which all business is owned. Now here is a brief description of what they involve: Sole trader- almost all of the business in the o.k. Are owned by sole traders. Sole traders are individuals who have set up a business on their own. If you are a sole trader you have 100% control over what happens in your business. Sole traders are usually small business, which could range from florists to accountants. If you are a sole trader you have unlimited liability. Unlimited liability is when you are responsible for paying al of the debts in which you may have run up. If your business as a sole trader fails you will have to pay your debts or if you don't you will become bankrupt. The best thing about starting up a sole trader business is that you are your own boss, you don't have to share your profits out and it is relatively easy and straightforward to set up. But being a sole trader does have bad points about. To start with it is risky if you aren't sure what you are doing. You can lose everything think you own if your business goes under because you have unlimited liability. Last of all you work very long hours, and you can't really afford to be ill or take holidays because you will lose business. Partnership- a partnership is when two or more people going up to a maximum of 20 own a company. Many businesses are owned by partnerships just like sole traders. Partnership business share out their profits equally and debts if any are run up. ...read more.

This is because the Warburtons Company would still have their limited liability. If they have limited liability they can claim insolvency. If warburtons became a public limited company the Warburtons family would own it anymore though. It would be owned by the general public and shareholders so it would be a family baker anymore. Being owned by a partnership would work out well because they are a family and all could be joint owners of the company, but they would no longer have limited liability they would have unlimited liability and if they couldn't pay there bills they would become bankrupt, and could lose everything they own. The best ownership for Warburtons is what they currently have. That is being a private limited company because it suits all of there required needs. Warburtons Location When Warburtons choose a location for there new bakery they need to put many thing into consideration to make sure that it is an appropriate location for them to build on. Here are just some factors in which warburtons put into consideration before deciding on a site to build on: * Planning permission. * Access to motorways and major roads. * Cost of the land. * The skills of the local labor force. * The cost of the local labor force. * Access to the local market (the customers) * Charges from the local government * Financial help from government agencies * Is it located close to any other of its rivals. When looking for appropriate locations for there new bakeries Warburton's seek out the help and assistance of the county council for land in the first instance when considering a appropriate location and then the private sector. Warburtons own many bakeries and depots in the UK area. War burtons own 9 bakeries in the UK mainland and has another one currently being built. War burtons have 9 depots in the UK which all have good transport links. Here is the list for where all the bakeries in the U.k. ...read more.

In all of this area above in total Dixon's have 386 stores in the UK area. Dixon's rely on customers to make money so it needs to be close to them. Most Dixon's stores are located in shopping centers like Merry Hill. There are also stores located in shopping centers like West Bromwich where shoppers go. Also out of town shopping centers are becoming popular to shop at so they are appearing up there. Most of Dixon's main competitors e.g.) Curry's are owned by Dixon's so if they locate all of their shops in a shopping center they will get 100% of the customers. Location is important for Dixon's if they spend a lot of money on a new premises and it fails to make money because it is a bad location they will have to move it to make a profit. Dixon's does need to concentrate on conquering Ireland so if it were to build more there supposing it was in the correct location they would make a lot of money because they don't have many stores over their. Dixon's also owns many other companies, which doesn't trade under its name. The stores, which it owns, which are located in England are companies like: * Curry's * Dixon's * Pc world * The link These are 4 main companies in which Dixon's owns which trades in the UK nut not under its name. The other companies which it owns mainly trades on the continent. The companies, which it owns but exist in Europe, are: * Pc city - pc city is located in France, Spain and Italy * Helkjop- helkjop has 133 stores in Europe which are located mainly in places like Denmark, Sweden, Norway and Iceland * Electro world- Electroworld trades in places like Hungary and Romania, it has annual sales of only �4 million a year. * Unieuro- unieuro sells its products in Italy it has 88 stores in Italy and has an annual turnover of �317 million a year ...read more.