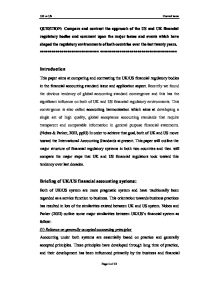 Compare and contrast the approach of the US and UK financial regulatory bodies and comment upon the major issues and events which have shaped the regulatory environments of both countries over the last twenty years.

(European Commission, 1995, p4) IASB was found within EU. Most of its member is from the UK accounting profession. So it is very close to and is highly influenced by UK system. 3)Process and influence of IASs application In 1995, EU commission decided to move towards IAS in order to achieve the broader international accounting harmonization and deal with their accounting problems. In 1996, EU commission announced that there aren't any significant differences between EU Accounting Directives and IASs. After that, IASB has worked in conjunction with EC in order to reduce the differences between EU Accounting Directives and IASs. In 2000, EC proposed compulsory use of IASs for the consolidated statements of listed companies by 2005. On July 2002, the European Parliament and Council released the Regulation (EC) No 1606/2002 of the application of international accounting standard (IAS Regulation) in order to harmonises the financial information presented by public listed companies in order to ensure a high degree of transparency and comparability of financial statements. In UK, EU's IASs regulation introduces important changes, which will directly influence the way in which UK's companies prepare their financial statements. For those UK companies affected, this EU's regulation means they will have to comply with accounting standards issued by IASB, instead of much of the Companies Act 1985 and the domestic accounting standards issued by the Accounting Standards Board (ASB). In this way, this regulation make IASB standards have direct legal force in UK. Recently ASB has a programme of converging domestic and IASB standards. In the future, UK standards are likely to be very similar to IASB standards in many respects, and in particular, ASB standards will only be used by non-publicly traded companies. (Source: DTI website. 2002) Unlike Accounting Directives, EU IAS Regulations have the force of law without requiring transposition into national legislation. Member States have the option of extending the application of this Regulation to unlisted companies. ...read more.