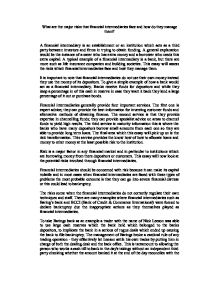 What are the major risks that financial intermediaries face and how do they manage them?

What are the major risks that financial intermediaries face and how do they manage them? A financial intermediary is an establishment or an institution which acts as a third party between investors and firms in trying to obtain funding. A general explanation would be the instance of a saver who has extra money and a borrower who needs this extra capital. A typical example of a financial intermediary is a bank, but there are more such as life insurance companies and building societies. This essay will assess the risks which financial intermediaries face and how they manage them. It is important to note that financial intermediaries do not use their own money instead they use the money of its depositors. To give a simple example of how a bank would act as a financial intermediary. Banks receive funds for depositors and while they keep a percentage in of this cash in reserve in case they want it back they lend a large percentage of it out or purchase bonds. Financial intermediaries generally provide four important services. The first one is expert advice; they can provide the best information for investing customer funds and alternative methods of obtaining finance. The second service is that they provide expertise in channelling funds; they can provide specialist advice on areas to channel funds to yield high results. The third service is maturity information this is where the banks who have many depositors borrow small amounts from each one so they are able to provide long term loans. ...read more.

Going back to the Barings bank example Nick Leeson gambled the sum of 1.2 billion dollars on believing that the Nikkei would increase in strength and value. But what actually happened due to global economics and the Kobe earthquake the Nikkei actually fell in value. This meant that Barings bank the oldest merchant bank around went insolvent because its losses on the Futures market exceeded the banks own equity capital. It can therefore be said that market risk can be greatly induced if a financial intermediary takes open or unhedged bets in foreign exchange, equities and bonds as the prices or rates can change in undesired directions. Another risk which must be considered is the credit risk. This is where the expected cash flows and payments which have been borrowed out by the financial intermediaries have not been paid back. In the trade this is called bad debts, and it accounts for large changes in a companies balance sheets to show a lower profit and hence if they are a publicly limited company a drop in the share prices. An example of this can be seen by the trading reports of Lloyds TSB in 2001 when they issued their accounts and market players could not tolerate the levels of bad debts, which almost immediately was reflected in its share price. A way that this is avoided and managed is through screening and monitoring loan applications so that this percentage of bad debt is actually reduced. Another type of risk is technological and operational. ...read more.

This form of risk management is purely for the management to assess who is capable of getting returns with higher amounts of risk. The final risk management procedure is regulation. Regulators are only concerned with the social costs of failure and therefore allow for strict more conservative models to be implemented in a financial intermediary. Therefore by being constantly regulated they will have to account for there actions, this may seem like a good way of managing the risk but this was no help to when ENRON went bust and they were hiding losses for years and showing that the company was worth more then it actually was. In conclusion the financial intermediaries learn from past examples, Barings sent shock waves around all financial institutions as well as regulatory bodies. The same can be said for ENRON. But as the world is being introduced to the likes of global terrorism and the heinous attacks of the worlds largest financial capital on September 11th there was an increased reason to protect themselves form risks from insider factors and now new deadly outsider factors. When you are in a high risk market playing with large amounts of other people's money to make a financial system work there can never be no risk. As the financial world gets to grips with new threats and risks it makes sure that it has some ways of protecting itself. I would like to end this essay with a quote "Take calculated risks. That is quite different from being rash. Do not fear risk. All exploration, all growth is calculated. Without challenge people cannot reach their higher selves. Only if we are willing to walk over the edge can we become winners." ...read more.