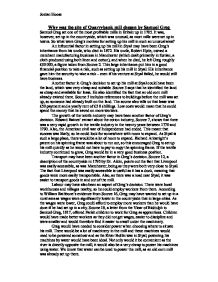 Why was the site of Quarrybank mill chosen by Samuel Greg.

Why was the site of Quarrybank mill chosen by Samuel Greg Samuel Greg set one of the most profitable mills in Britain up in 1785. It was, however, set up in the countryside, which was unusual, as most mills were set up in towns. So what were Greg's motives for setting up his mill in such an unusual area? An influential factor in setting up his mill in Styal may have been Greg's inheritance from his uncle, who died in 1872. His uncle, Robert Hyde, owned a merchant manufacturing business in Manchester (which dealt primarily in fustian, a cloth produced using both linen and cotton), and when he died, he left Greg roughly �30 000, a figure taken from Source 2. This large inheritance put him in a good financial position to take a risk, such as setting up his mill in Styal. ...read more.

Also, the American civil war of Independence had ended. This meant that success was likely, so he could look for somewhere with room to expand. As Styal is such a large place, there would be a lot of room to expand. Richard Arkwright's patent on his spinning frame was about to run out, so this encouraged Greg to set up his mill quickly as he would not have to pay to copy the spinning frame. If the textile industry continued to grow, Greg would be in a very good business position. Transport may have been another factor in Greg's decision. Source 12, a description of the countryside in 1795 by Dr. Aikin, points out the fact that Liverpool was easily accessible, as was Manchester, being as they were both very close to Styal. The fact that Liverpool was easily accessible is useful as it has a dock, meaning that goods were more easily transportable. ...read more.

Greg would have needed to consider power when choosing where to situate his mill. There would be a lot of machinery in the mill and these machines would need to be powered somehow and as the River Bollin was in Styal, powering his machines by water would have been ideal. Not only would it be convenient as the river is directly opposite the mill, it would also be a very cheap to power his machines using water. We know that water can be used to power the mill, as an old corn mill was already set up there. Samuel Greg is clearly a good businessman, and part of being a good businessman is the ability to take risks. As he would not have been able to take such a huge risk without his inheritance, I believe his inheritance was the most influential factor in his decision. However, the fact that he would save money from power, by using water, is also a very important factor. Jordan Hoose ...read more.