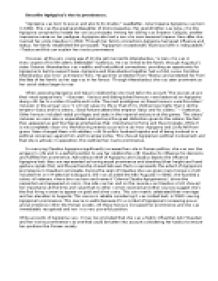 ﻿Describe Agrippina?s rise to prominence. ?Agrippina was born to power and also to its shadow? Leadbetter. Julia Vispania Agrippina was born in 15AD. She was the great granddaughter of divine Augustus. Her grandmother was Julia, who like Agrippina conspired to instate her son as principate. Among her sibling was Emperor Caligula, another impressive name on her pedigree. Agrippina also had a son who soon became Emperor Nero after she married her uncle Claudius in 49AD. Through her family connections Agrippina had great influence and status; her family established the principate. ?Agrippina?s exceptionally illustrious birth is indisputable.? ?Tacitus and this can explain her rise to prominence. However, at the very young age of 13 she got married to Ahenobarbus, ?a man who was in every aspect of his life utterly detestable? Suetonius. ...read more.

or that of my children less highly than I do the emperor Gaius and his sisters...Good fortune attend the emperor Gaius and his sisters.? ? Suetonius. Other honours included vestal privileges and seats in the imperial enclosure at the games. The sisters? inclusion on coins also is unparalleled and portrays the great distinction given to the sisters; the fact they appeared as god-like figures emphasises their importance to Rome and the principate .While it is not completely clear why the following events occurred we do know Agrippina and Livilla fell from grace. Gaius charged them with adultery with Drusilla?s husband Lepidus and of being involved in a political conspiracy against him and his emperorship. ...read more.

One side was her and on the reverse was Claudius which showed her importance at the time and value that no other women received and other sources suggest she?s the first living woman to appear on gold and silver coins. This coin mainly celebrated their marriage and her elevation to Augusta. This source is reliable considering it was minted back in 50AD viewing Agrippina?s prominence. This source is useful because it?s a symbol of Agrippina?s increasing power and prominence within the Roman society. All these honours increased her prominence and she was immediately recognised and now in a very powerful position. While accounts of Agrippina vary, it may be concluded that she was a highly influential Julio?Claudian and her rise to prominence was one that could be taken into account considering her tactics to ensure her positions the Roman society. ...read more.