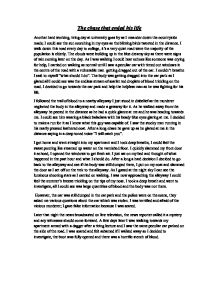 The chase that ended his life Another hard working, tiring day at university goes by as I meander down the countryside roads; I could see the sun scorching in my eyes as the blitzing birds tweeted in the distance. I walk down this road every day to college, it's a very quiet road were the majority of the population is elderly. The clouds were building up in the blue dreamy sky as there were signs of rain coming later on the day. As I was walking I could hear echoes like someone was crying for help, I carried on walking as normal until I saw a peculiar car with tinted out windows in the centre of the road with a vulnerable man getting dragged out of the car. I couldn't breathe I said to myself "what should I do". The body was getting dragged into the car park as I glared all I could see was the endless stream of scarlet red droplets of blood trickling on the road. ...read more.

After a long a hard decision I decided to go back to the alleyway and see if the body was still dumped there, I put on my coat and slammed the door as I set off on the trek to the alleyway. As I gazed at the night sky I can see the luminous shooting stars as I carried on walking. I was now approaching the alleyway I could feel the summer's breeze trickling on the tips of my nose. I took a deep breath and went to investigate, all I could see was large quantities of blood and the body was not there. However, the car was still dumped in the car park and the police were on the scene, they asked me various questions about the car which was stolen. I was terrified and afraid of the vicious murderer; I gave false information because I was scared. Later that night the news broadcasted on live television, the news reporter called it a mystery and any witnesses should come forward. ...read more.

He was only metres away from me. The rain was pouring down vigoursly on my face as the ground was muddy. I walked towards the cold blooded murderer and got the dagger and stabbed him in the chest he fell to the muddy ground. The blood was dripping on my hand as there fierce rain washed it off. The smell of death was around as the dagger fell on the ground as my hands were shivering. I thought to myself what have I done? I was truly ashamed, I then dragged the body by some allotments near the canal and I ran home. The next day I woke up bright and early and went back to the crime scene, there was blood everywhere even on the pavement. The smell of death was around; I had to get rid of the body. I got the helpless body and threw it in the canal. My hands were covered with blood I sat down on the bench by the canal, and thought to myself how could I sink so low and be a murderer and a cold icy tear came down my red cheeks as I was scared of the crime I committed. ...read more.