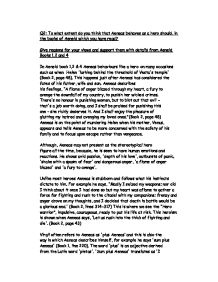 To what extent do you think that Aeneas behaves as a hero should, in the books of Aeneid which you have read? Give reasons for your views and support them with details from Aeneid Books 1,2 and 4

Q2: To what extent do you think that Aeneas behaves as a hero should, in the books of Aeneid which you have read? Give reasons for your views and support them with details from Aeneid Books 1,2 and 4 In Aeneid book 1,2 & 4 Aeneas behaviours like a hero on many occasions such as when Helen 'lurking behind the threshold of Vesta's temple' (Book 2, page 48). This happens just after Aeneas has considered the fates of his father, wife and son. Aeneas describes his feelings, "A flame of anger blazed through my heart, a fury to avenge the downfall of my country, to punish her wicked crimes. ...read more.

Although, Aeneas may not present as the stereotypical hero figure all the time, because, he is seen to have human emotions and reactions. He shows avid passion, 'depth of his love', outbursts of panic, 'shake with a spasm of fear' and dangerous anger, 'a flame of anger blazed' and 'a fury to avenge'. Unlike most heroes Aeneas is stubborn and follows what his instincts dictate to him. For example he says, "Madly I seized my weapons; nor did I think about it once I had done so but my heart was aflame to gather a force for fighting and rush to the citadel with my companions; frenzy and anger drove on my thoughts, and I decided that death in battle would be a glorious end.' ...read more.

Virgil often refers to Aeneas as 'pius Aeneas' and this is also the way in which Aeneas describes himself, for example he says 'sum pius Aeneas' (Book 1, line 220). The word 'pius' is an adjective derived from the Latin word 'pietas'. 'Sum pius Aeneas' translates as 'I Aeneas am a man of duty' (i.e. a man to other men). Virgil designed Aeneas as a character to which every Roman ought to aspire. Aeneas delivers speeches to his fleet to keep the men's spirits high. Virgil intended Aeneas to be the Roman hero embodying the most valued personality traits of a strong devotion to duty, a strong character, and putting the common good before personal gain. Aeneas does show strong leadership qualities. Like most heroes he experiences temptations and hardships. ?? ?? ?? ?? ...read more.