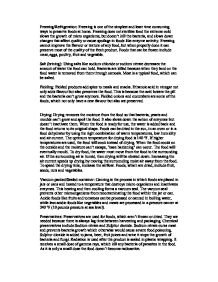 Freezing/Refrigeration: Freezing is one of the simplest and least time consuming ways to preserve foods at home. Freezing does not sterilize food the extreme cold slows the growth of micro organisms, but doesn't kill the bacteria, and slows down changes that affect quality or cause spoilage in foods like enzyme activity. Freezing cannot improve the flavour or texture of any food, but when properly done it can preserve most of the quality of the fresh product. Foods that can be frozen include meat, eggs, poultry, fruit and vegetable. Salt (brining): Using salts like sodium chloride or sodium nitrate decreases the amount of water the food can hold. Bacteria are killed because when they land on the food water is removed from them through osmosis. Meat is a typical food, which can be salted. ...read more.

When the food cooks on the outside and the moisture can't escape, "case hardening" can occur. The food will eventually mould. To dry food, the water must move from the food to the surrounding air. If the surrounding air is humid, then drying will be slowed down. Increasing the air current speeds up drying by moving the surrounding moist air away from the food. To speed the drying time, increase the airflow. Foods, which are dried, include fruit, seeds, nuts and vegetables. Vacuum packed/Sealed container: Canning is the process in which foods are placed in jars or cans and heated to a temperature that destroys micro organisms and inactivates enzymes. This heating and then cooling forms a vacuum seal. The vacuum seal prevents other microorganisms from recontaminating the food within the jar or can. ...read more.

When you pasteurise a food, normally a liquid, you are basically heating it to a high enough temperature to kill certain bacteria and to inactivate certain enzymes, and in return you are lowering the effects on taste as much as you can. Commonly pasteurised foods include milk, ice cream, fruit juices, beer and non-carbonated beverages. Smoking: Smoke cooking is done at higher temperatures in order to cook the meat. Smoke curing is just smoking cured meat or sausage. Although smoking meat does provide some preservative effect, by itself it isn't sufficient to allow long-term storage. Smoke is a very complex material, with more than 200 components that include alcohols, acids, phenolic compounds, and various toxic, sometimes carcinogenic substances. The toxic substances slow down the growth of microbes and the phenolics slow down fat oxidation. Foods such as meat and fish, especially salmon, are smoked not just because of preservation but also because of taste. ...read more.