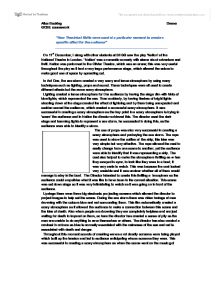 "How Theatrical Skills were used at a particular moment to create a specific effect for the audience" On 17th December, I along with other students at SHSG saw the play 'Nation' at the National Theatre in London. 'Nation' was a romantic comedy with elements of adventure and thrill. Nation was performed in the Olivier Theatre, which was an arena; this was very useful throughout the play as it had a very large performance stage, which allowed the actors to make good use of space by spreading out. In Act One, the sea storm created a very scary and tense atmosphere by using many techniques such as lighting, props and sound. These techniques were all used to create different effects but the same scary atmosphere. Lighting created a tense atmosphere for the audience by having the stage dim with hints of blue lights, which represented the sea. Then suddenly, by having flashes of bright lights shooting down at the stage created the effect of lightning and by them being unexpected and sudden scared the audience, which created a successful scary atmosphere. It was successful in creating a scary atmosphere as the key point in a scary atmosphere is trying to 'scare' the audience and in Nation the director achieved this. ...read more.

Throughout this moment sounds of crashing waves and deadly screams were being played which built up the tension and led to audience anticipating whose screams they were. This was successful in creating a scary atmosphere as when the scene went on the music got louder, building up tension until everything came to a sudden climax, leaving the audience suspicious. Overall, this moment was very successful in using a variety of theatrical skills to create a scary atmosphere for the audience, especially the lighting as it was used to help the audience identify the time of day and the set. This play also had elements of humour throughout it. Milton, the parrot was able to create a funny atmosphere and added an aspect of humour to 'Nation'. In order to create a successful funny atmosphere you must make the audience laugh and Milton achieved this through using characterisation. Milton used body language to portray his character as a parrot by moving the way a parrot does; popping his shoulders forward and moving his head forward and backwards. This was effective in creating a funny atmosphere as it made the audience laugh as his character was so realistic. This showed the audience that the actor must have worked hard and studied parrots in order to achieve such fantastic realism. ...read more.

As the birds moved downstage it made the audience feel very intimidated as they were directly in front of them and the audience had just figured out that humans were the birds prey. The men controlling the birds helped with creating an eerie atmosphere as they were dressed in black so the audience were unable to see them. This meant that the audience were led to believe these birds were real, so the director intended to scare the audience. This puppet was used very effectively as the men controlling the birds had to work together and make sure they were in time, this showed the audience commitment. Overall, this prop was used to its best potential to create an eerie atmosphere, as the prop was able to rapidly change the emotions in the theatre from sadness to fear. In conclusion Theatrical skills have been proven to successfully create a specific atmosphere towards the audience. There are a variety of ways in which to create a certain atmosphere for the audience and moments in Nation have shown that simple effects such as lighting and sound can create a specific type of atmosphere or more original ideas can be used such as props and caricatures. ?? ?? ?? ?? Alice Bocking Drama GCSE coursework ...read more.