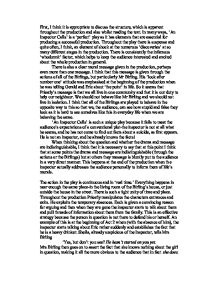 First, I think it is appropriate to discuss the structure, which is apparent throughout the production and also whilst reading the text. In many ways, 'An Inspector Calls' is a 'perfect' play as it has elements that are essential for producing a successful production. Throughout the play there is suspense and quite often, I think, an element of shock at the numerous 'discoveries' at so many different stages in the production. There is consistently the infamous 'whodunnit' factor, which helps to keep the audience interested and excited about the whole production in general. There is also a clear moral message given in the production, perhaps even more than one message. I think that this message is given through the actions of all of the Birlings, but particularly Mr Birling. His 'look after number one' attitude was emphasised at the beginning of the production when he was telling Gerald and Eric about 'the point' in life. So it seems that Priestly's message is that we all live in one community and that it is our duty to help our neighbour. We should not behave like Mr Birling and we should not live in isolation. ...read more.

In Stephen Daldry's production, the actual house is set up in the sky on stilts, giving the impression that it is distant and separate from the outside, real world-full of hard earnings and gruesome work. I think it is on stilts to show physically the difference between the Birlings and the generic figure of Eva Smith. The high up house emphasises their elevated status and shows us that they must come down from the clouds and relinquish that. However, the house is on stilts and this shows us that there is a connection between the upper class and lower class people. It tells us that we are all human beings who have feelings and emotions and that we must work together. It is impossible for the Birlings to separate themselves-they are physically joined to the ground level. The house also gives the possibility that what is happening in the Birlings home could also be happening elsewhere-that it is not just a particular family who behaves this way-but a large part of society at that time. Sadly, this is still very applicable today. Also, the fact that the house is so small is a symbol that the people inside are small and narrow-minded people who only think about themselves and what is best for them. ...read more.

Mrs Birling wore a deep red dress and her daughter wore a virginal white dress that contrasted incredibly with her mother's. Perhaps this was a sign of the fact that Sheila is perhaps a good, warm-hearted person, whereas her mother is quite the opposite. The setting of the play is quite significant (1910). It was written and performed in 1948 after World War II. The audience knows that has happened after the period in which the play is set, which is known as dramatic irony. An atmosphere of ironic tension is established from the beginning with Birling's speeches about every man having to look after himself and ignore others. Yet just a few decades later so many countries were coming together and helping each other to fight in the war. In conclusion, I must agree with Stephen Daldry that in 'An Inspector Calls' the drama and the message are indistinguishable. However, in many instances, they are not, such as at the end of the play when the inspector actually addresses the audience in separation from the rest of the play. Overall, though, I must agree with Stephen Daldry in every aspect when he says 'In the end, whatever the message of it is, this is a jolly good thriller' ...read more.