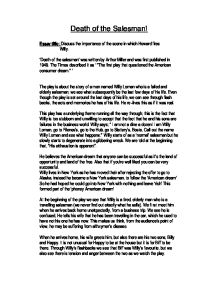 Death of the Salesman - Discuss the importance of the scene in which Howard fires Willy.

Death of the Salesman! Essay title: Discuss the importance of the scene in which Howard fires Willy. 'Death of the salesman' was written by Arthur Miller and was first published in 1949. The Times described it as ' "The first play that questioned the American consumer dream." ' The play is about the story of a man named Willy Loman who is a failed and elderly salesman; we see what subsequently be the last few days of his life. Even though the play is set around the last days of his life, we can see through flash backs, the acts and memories he has of his life. He re-lives this as if it was real. This play has a underlying theme running all the way through; this is the fact that Willy is too stubborn and unwilling to accept that the fact that he and his sons are failures in the business world. Willy says; " I am not a dine a dozen! I am Willy Loman, go to Filenes's, go to the Hub, go to Slattery's, Bosta, Call out the name Willy Loman and see what happens." Willy starts of as a 'normal' salesman but he slowly starts to degenerate into a gibbering wreck. ...read more.

However this seems like he is rubbing it in to Willy how much money he has and how little Willy has; but Willy goes along with him talking away like he has lots of spare money. This also shows how he is in denial about how unsuccessful a businessman he really is. We know from at the beginning of the play where he says he bought a fridge because it had the 'biggest ads of any of them,' that he only buys things to show off his wealth but this isn't good when he has to borrow money off Charley to pay the instalments. Secondly, we see another way in which why Willy has failed as a businessman: his knowledge of the working world isn't much and it works in a completely different way. Howard's firm knows that Willy has lost his touch and this is apparent when they pay him on commission only, so then they wouldn't just be throwing money away. When Willy asks for a paid desk job he believes he'll get it because he is 'well-known' and 'well-liked', he talks about the old working days when 'there was personality... ...read more.

The play is set around a father and his two sons who have failed in the business world and all of their lives have been lies and secrets to do with money and women. We see that they all cannot admit failure especially the father Willy. We see that the only way in which Willy could ever come to terms with his failure is to kill himself. At, the end he does so once he knows that he has failed his family and wont be able to get another job. The only way in which he can help his family is by killing himself so they then will get some money by inheriting his life insurance. The scene where Howard fires Willy is an important one, because this is where the audience see Willy precipitated into suicide. We recognised the importance for Willy of his job in a way that Howard doesn't. The loss of job confirms his failure and Willy believes a failure has no right to exist; so, he must die. He manages to convince himself that he is better of dead; he even tells Charley he "is worth more dead". The end of the play shows how pathetically misguided he is in this view, when nobody turns up to his funeral. This scene lays the foundations for all that follows. ...read more.