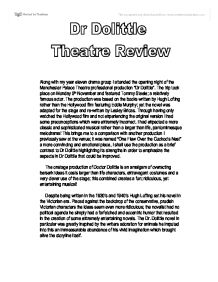 Along with my year eleven drama group I attended the opening night of the Manchester Palace Theatre professional production "Dr Dolittle". The trip took place on Monday 5th November and featured Tommy Steele; a relatively famous actor. The production was based on the books written by Hugh Lofting rather than the Hollywood film featuring Eddie Murphy; yet the novel was adapted for the stage and re-written by Lesley Bricas. Through having only watched the Hollywood film and not experiencing the original version I had some preconceptions which were extremely incorrect. I had expected a more classic and sophisticated musical rather than a larger than life, pantomimesque melodrama! This brings me to a comparison with another production I previously saw at the venue; it was named "One Flew Over the Cuckoo's Nest" a more convincing and emotional piece, I shall use the production as a brief contrast to Dr Dolittle highlighting its strengths in order to emphasize the aspects in Dr Dolittle that could be improved. The onstage production of Doctor Dolittle is an amalgam of overacting berserk ideas it casts larger than life characters, extravagant costumes and a very clever use of the stage; this combined creates a fun; ridiculous, yet entertaining musical! Despite being written in the 1930's and 1940's Hugh Lofting set his novel in the Victorian era. Placed against the backdrop of the conservative, prudish Victorian characters the ideas seem even more ridiculous; the novelist had no political agenda he simply had a farfetched and eccentric humor that resulted in the creation of some extremely entertaining novels. The Dr. Dolittle novel in particular was greatly inspired by the writers adoration for animals he imputed into this an immeasurable abundance of his vivid imagination which brought alive the storyline itself. The plot concerns Mr. Dolittle, an extraordinary and eccentric Doctor who cares more about animals than his human patients! The Doctor lives in the country with his dog, Jip, his parrot Polynesia, his pig, GubGub, his duck, DabDab, his monkey, CheeChee, and an owl, TooToo. ...read more.

Another thing that distracted me as a viewer was the ridiculous facial expressions made by Steele, the doctor is a happy person but Tommy Steele just couldn't stop smiling he would be having an argument with Miss Fairfax yet he would smile uncontrollably throughout this made it so there was no tension build up between characters which was very disappointing. Another key moment when he slipped up was in the scene when himself and Miss Fairfax were talking about their relationship and started laughing I feel in this specific moment both characters let us down as they became out of role. Also I noticed that during the performance sometimes Tommy Steele would stare at the audience stopping his interaction with the actors on stage this also detracted from his conversations. Finally, close to the end of the production Dr. Dolittle is saying goodbye to Miss Fairfax and he has his back to the audience; also he becomes upstaged by Miss Fairfax which seemed very unprofessional. Miss Emma Fairfax as I have mentioned before was not played professionally. There was a monotone woodness about the whole character that forced me into thinking the actress was terribly cast! The main storyline that comes with this character is the relationship she builds with Dr. Dolittle himself. I find this area of the script quite disturbing. Miss Fairfax in around twenty four years of age whereas he is seventy they form a sexual relationship which to me is quite perverse and shouldn't be encouraged as being normal in society. This relationship caused the love scene to be completely unconvincing and bizarre. Tommy Steele couldn't help the fact that in the script there were un-witty jokes and though I don't particularly rate his performance there are some things that he and his cast could not help. I am specifically drawn to the scene where Dr. Dolittle is freeing Sophie the Seal and throwing her into the sea. ...read more.

The lighting used in the production wasn't very extravagant though it was usually very bright. There was only one scene where lighting was used a lot this was during the circus; arrays of colours were used creating a crazy and flamboyant display of light! The stage was of a proscenium arch style and it was an end on theatre. Our drama group was seated in tiered seating. We were placed in the orchestra stalls and it was very spacious and comfortable we were relatively close to the stage and most of us were in the centre this gave us a great view which was a real advantage. In conclusion to my theatre experience of "Doctor Dolittle" I am quite split in thought of what my opinion is. There were as mentioned a lot of things that I found unsatisfactory and unprofessional whereas the scenery and special effects along with the amazing animals saved the day completely. The lighting in the circus scene was marvelous and the costumes for each character were to be commended greatly. I didn't feel though that I was emotionally involved with the production, though unlike "One Flew Over The Cuckoos Nest" it wasn't a tragedy I didn't feel any connection with the characters like I did in the Shane Richie production. It was a fun play to watch though and I would recommend it for a younger audience. I feel that there were points where the characters should have made me feel upset for them or annoyed at the happenings of the story for instance when there was the shipwreck I didn't see any believable upset or anger from the characters this disappointed me a little as it would have been a good point to introduce high tension. I feel that I do have respect for Doctor Dolittle's work when following the storyline; I think it would be a lovely idea for humans to be able to interact with animals and I believe the passion the doctor has for animals is charming. ...read more.