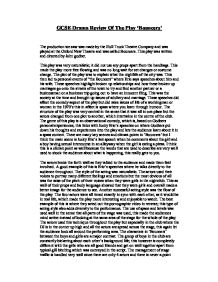 GCSE Drama Review Of The Play 'Bouncers' The production we saw was made by the Hull Truck Theatre Company and was played at the Oxford New Theatre and was called Bouncers. This play was written and directed by John godber. This play was very naturalistic; it did not use any props apart from the handbags. This made the play more free flowing and was no long wait for set changes or costume change. The plot of the play was to explain what the nightlife of the city was. This then led to personal events of "the Bouncers" where Eric says speeches about him and his wife. These speeches highlight broken up relationships and how these broken up marriages go onto the streets of the town to try and find another partner or a businessman on a business trip going out to have an innocent fling. This was the society at the time and brought up issues of adultery and marriage. These speeches did affect the comedy aspect of the play but did raise issues of life of a workingman or woman in the 1970's this in affect is spass where you learn through humour. ...read more.

The actors used this technique throughout the play but especially in the club where the DJ is in the corner up high and all the actors are spread across the stage, this again let the audience look all around the performing area. The characters in 'Bouncers' between the boys and girls are a major contrast. The group of boys in the club are constantly bickering about each other's background life; this however is completely different with the girls who are all good friends and get on well together apart from typical gill b******g which was conveyed in the script. The management of stage traffic is handled very well since there are only 4 actors and there is never a point where the acting stops for a costume change. The audience reactions to the different acting styles is generally very positive however when Eric's speeches were being acted there were many sighs from the audience including me, I feel that they became a bit tedious. The set used was very plain and was representational. The colour of the set was black, which represents nightlife of a town and inside of the club, which were both of the scenes. ...read more.

As a member of the audience I emphasised with the characters and felt emotionally involved. I think this effect was made by talking directly to the audience through Eric's speeches, using many other drama techniques including slow motion and breaking the fourth wall. The overall success of the performance was due to the timing by all the actors and the jokes that kept the audience interesting and at the same time portraying many social problems in British nightlife. The best piece of the performance was the rewind of the video. I think this was the best because it is different from any other theatre piece and being a drama student I can understand how much rehearsal and time it took to make that piece as perfect as it was. My final judgement is that it is a well worked play and gives both comical and political aspects to the audience, which makes the audience educated and jolly after coming out of the theatre. The general impression that I am left with is that the issues in the play that were raised moved me. These showed just how British life has degraded; I think the best way to portray this is in this play and especially the pizza scene by the ally. This play has brought up many issues and will always enjoy any type of audience. ...read more.

Although this piece begins to represent the format of a review the expression used often holds back its success. There needs to be a more formal approach. When writing a review, write as if you are a journalist writing for a paper rather than just any old member of the audience.