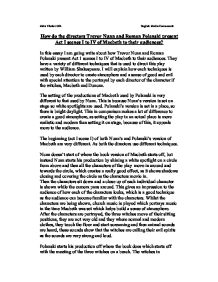 How do the directors Trevor Nunn and Roman Polanski present Act I scenes I to IV of Macbeth to their audiences?

Zahir Choksi 10B English Media Coursework How do the directors Trevor Nunn and Roman Polanski present Act I scenes I to IV of Macbeth to their audiences? In this essay I am going write about how Trevor Nunn and Roman Polanski present Act 1 scenes I to IV of Macbeth to their audiences. They have a variety of different techniques that is used to direct this play written by William Shakespeare. I will explain how each techniques is used by each director to create atmosphere and a sense of good and evil with special attention to the portrayal by each director of the character if the witches, Macbeth and Duncan. The setting of the productions of Macbeth used by Polanski is very different to that used by Nunn. This is because Nunn's version is set on stage so white spotlights are used. Polanski's version is set in a place, so there is bright daylight. This in comparison makes a lot of difference to create a good atmosphere, as setting the play in an actual place is more realistic and modern than setting it on stage, because of this, it appeals more to the audience. The beginning (act I scene I) ...read more.

The portrayal and description of Macbeth is that he is middle-aged, open when he speaks and he is friendly. Banquo is about the same age as Macbeth. The witches then just become visible and Macbeth and Banquo are shown close up as they turn immediately around pointing their weapon at the witches. Polanski uses a good technique in doing this because he creates atmosphere by showing Macbeth and Banquo to be very alert and aware of the surroundings and they also have an immediate reaction. Each of the witches tells Macbeth about the three prophesises, and also tells Banquo about a prophesise. When Macbeth tries to question them further the witches disappear. Nunn uses a good way of making the witches go away, because they don't just run away, but they disappear, which is more dramatic and effective. Ross and Angus then appear and tell Macbeth about him being grant the title Thane of Cawdor. Macbeth then shifts away from Ross, Angus and Banquo and a close up of Macbeth is shown and he shares his thoughts by talking to the audience. These thoughts are hidden from the rest of the cast so it is like a voiceover. ...read more.

Although Nunn's production did a have a little impact on me because of the viewing of each character at the start of the play which gives the audience a picture in their mind of each character and so this was a technique used by Nunn which had a lot of impact on me. Only two scenes in Polanski and Nunn's production were edited: In Polanski's, in act 1 scene 2, it was started of from the sounds of the fighting and the showing of the aftermath of the fighting. In Nunn's, in act scene 1, it was started of by showing all the characters individually. The use of original language was changed a few times in both productions but mostly throughout the productions original language was used. In Nunn's production, the theme of good and evil was portrayed very well because Duncan and Macbeth at the beginning of the play were shown to be good people, especially Duncan who was shown to be religious. But as the play progressed further Macbeth dramatically changed into being evil because of what the witches tell him. The same scenario takes place in Polanski's version but the difference is that the king is not more good and religious and Macbeth is more evil after because of how young he is and how greedy he is to fulfil the three prophesies. ...read more.