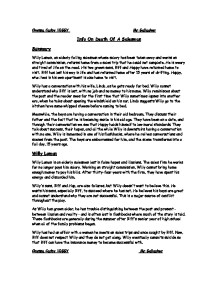 Info On Death Of A SalesmanSummary

Chynna Carby 10GGY Mr Gallagher Info On Death Of A Salesman Summary Willy Loman, an elderly failing salesman whose salary has been taken away and works on straight commission, returns home from a sales trip that he could not complete. He is weary and tired of life on the road. His two grown sons, Biff and Happy have returned home to visit. Biff has lost his way in life and has returned home after 15 years of drifting. Happy, who lives in his own apartment is also home to visit. Willy has a conversation with his wife, Linda, as he gets ready for bed. Willy cannot understand why Biff is lost, with no job and no money to his name. Willy reminisces about the past and the reader sees for the first time that Willy sometimes lapses into another era, when he talks about opening the windshield on his car. Linda suggests Willy go to the kitchen have some whipped cheese before coming to bed. Meanwhile, the boys are having a conversation in their old bedroom. ...read more.

As Willy has grown older, he has trouble distinguishing between the past and present - between illusion and reality - and is often lost in flashbacks where much of the story is told. These flashbacks are generally during the summer after Biff's senior year of high school when all of the family problems began. Willy has had an affair with a women he meets on sales trips and once caught by Biff. Now, Biff does not respect Willy and they do not get along. Willy eventually commits suicide so that Biff can have the insurance money to become successful with. Chynna Carby 10GGY Mr Gallagher Linda Loman Linda is Willy's wife and is the arbiter of peace in the family. She is always trying to stand between Willy and her sons to ease the tension. She is protective of Willy. She knows that Willy is tired and is a man at the end of his rope - the end of his life and, as he put it, "ringing up a zero." She wants him to be happy even when the reality of the situation is bad. ...read more.

This conflict is the main material of the play. Eventually, Biff finally sees the truth and realizes that he is a "dime a dozen" and "no great leader of men." He tells this to Willy who is outraged. Willy shouts, "I am not a dime a dozen! I am Willy Loman and you are Biff Loman!" Happy Loman Happy is the Loman's youngest son. He lives in an apartment in New York, and during the play is staying at his parent's house to visit. Happy is of low moral character; constantly with another woman, trying to find his way in life, even though he is confident he's on the right track. Happy has always been the "second son" to Biff and tries to be noticed by his parents by showing off. When he was young he always told Willly, "I'm losin' weight pop, you notice?" And, now he is always saying, "I'm going to get married, just you wait and see," in an attempt to redeem himself in his mother's eyes. Happy also tries to be on Willy's good side and keep him happy, even if it means perpetuating the lies and illusions that Willy lives in. ...read more.