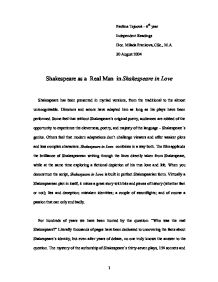 Pavl�na Tejcov� - 6th year Independent Readings Doc. Milada Frankova, CSc., M.A. 30 August 2004 Shakespeare as a Real Man in Shakespeare in Love Shakespeare has been presented in myriad versions, from the traditional to the almost unrecognizable. Directors and actors have adapted him as long as his plays have been performed. Some feel that without Shakespeare�s original poetry, audiences are robbed of the opportunity to experience the cleverness, poetry, and majesty of the language - Shakespeare�s genius. Others feel that modern adaptations don�t challenge viewers and offer weaker plots and less complex characters. Shakespeare in Love combines in a way both. The film applauds the brilliance of Shakespearean writing through the lines directly taken from Shakespeare, while at the same time exploring a fictional depiction of his true love and life. When you deconstruct the script, Shakespeare in Love is built in perfect Shakespearian form. Virtually a Shakespearean plot in itself, it mixes a great story with bits and pieces of history (whether fact or not); lies and deception; mistaken identities; a couple of swordfights; and of course a passion that can only end badly. For hundreds of years we have been hunted by the question: "Who was the real Shakespeare?" Literally thousands of pages have been dedicated to uncovering the facts about Shakespeare�s identity, but even after years of debate, no one truly knows the answer to the question. The mystery of the authorship of Shakespeare�s thirty-seven plays, 154 sonnets and two long poems remains unsolved, and people have been arguing for centuries about his identity (The Shakespeare Question). The purists take up one side of the debate: they are convinced the orthodox view of Shakespeare�s life is correct. They believe William Shakespeare was the son of an illiterate glove-maker from Stratford Upon Avon, who in his lifetime managed to become both an actor and a playwright. The Anti-Stratfordians take up the other side of the debate: they insist that a man of such humble circumstances could never have written the works within the Shakespearean canon. ...read more.

There are other examples: i) The boatman who ferries Shakespeare across the Thames while saying, "I had Christopher Marlowe in my boat once" (Shakespeare in Love) talks like a modern-day taxi driver. ii) At one point we see the theatre owner Philip Henslowe lamenting the closing of his theatre on the very eve of the Shakespearean production of Romeo and Juliet, which he hopes will repair his financial situation. So dismayed is he by this turn of events that he cannot get the words out: "The show," he stutters, "the show must -- " and he gags on the words. "Go on," urges his interlocutor (Shakespeare in Love). iii) An example of visual humour is a mug, inscribed "Souvenir of Stratford-Upon-Avon"; a deliberate anachronism as the mug could not have been there in Shakespearean times. This plays upon the audience�s knowledge that Stratford upon Avon is famous for being the birthplace of Shakespeare. iv) Another in-joke is about the six known signatures of Shakespeare. It is really funny to see Shakespeare sitting at his desk idly practising signatures. v) The therapist, I will talk about in the next paragraph, the plaques covering the therapist�s wall and his turning the timer are instances that mock the typical Freudian methods of psychology, which would ceirtainly not have been used in the sixteenth century. When we first meet great Shakespeare, he is desperate, suffering from a serious dearth of inspiration.He meets with a therapist, and reveals to him the current state of his life. From Shakespeare�s all too obvious phallic symbols, the therapist infers that he is blocked not only in his writing, but in his sexual performance as well. Shakespeare agrees that his marriage to Anne Hathaway, an older woman, has grown cold after the birth of their twins, and now, in London, he�s desperately searching for his muse. Will explains that he and Anne were married because she was already pregnant, and he now considers his "banishment" from her bed to be a blessing. ...read more.

He also transforms the battle between two playhouses, The Rose and The Curtain, into the feud between the two noble houses of Montague and Capulet in imaginary Verona. Will, of course, also seeks inspiration for his other works in every-day life. A good scene is when he is kissing Viola and then has a sudden idea for his famous sonnet Shall I Compare Thee to a Summer�s Day. But my favorite scene is when Wessex is in church after he has learned of Christopher Marlowe�s death. Shakespeare walks toward Wessex pointing his finger at him and Wessex, thinking he is seeing a ghost, screams hysterically and runs out of the church, a scene taken from Mackbeth and used here in different context and with a great comic effect. Yet, at the same time that it proposes that Shakespeare�s art is the immediate outcome of his life, the film does something more: it reassures the young generation that rigid barriers that keep young Will from marrying his love, Viola De Lesseps, are no more (cross-class romances are no longer forbidden). Actually, many more barriers are broken in the film - Rich and poor, noble and base, male and female, stage and life, actors and audience, past and present penetrate in the film. Shakespeare in Love is a celebration of Shakespeare in a modern culture, a postmodern society where he is reproduced through various froms of media, like T.V or film , but above all youth culture. In the film, Shakespeare is an actor from Stratford who left his family behind and who eventually bought his way into the Lord Chamberlain�s Men. During the course of Shakespeare in Love, Shakespeare completes Romeo and Juliet, and is known for his previous plays, Titus Andronicus and The Two Gentlemen of Verona. Regardless of whether or not the screenwriters intended to influence the literary debate, Shakespeare in Love creates a pop culture icon for a postmodern generation of Shakespearean fans, and challenges the scholarly existence of alternative theories by presenting the poet�s life in an entirely plausible (albeit not utterly realistic) fashion. ...read more.