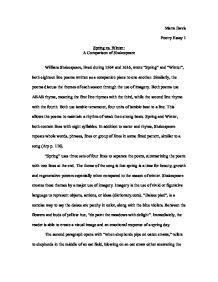 Marta Davis Poetry Essay 1 Spring vs. Winter: A Comparison of Shakespeare William Shakespeare, lived during 1564 and 1616, wrote "Spring" and "Winter", both eighteen line poems written as a companion piece to one another. Similarly, the poems discuss the themes of each season through the use of imagery. Both poems use ABAB rhyme, meaning the first line rhymes with the third, while the second line rhyme with the fourth. Both use iambic tetrameter, four units of iambic beat to a line. This allows the poems to maintain a rhythm of weak then strong beats. Spring and Winter, both contain lines with eight syllables. In addition to meter and rhyme, Shakespeare repeats whole words, phrases, lines or group of lines in some fixed pattern, similar to a song (Arp p. 176). "Spring" uses three sets of four lines to separate the poem, summarizing the poem with two lines at the end. The theme of the song is that spring is a time for beauty, growth and regenerative powers especially when compared to the season of winter. ...read more.

Living creatures are out everywhere whether they are singing, plowing, walking or cleaning. The last two sets of lines in each paragraph sing, "The cuckoo then, on every tree, mocks married men, for thus sings he, Cuckoo! Cuckoo, cuckoo! O word of fear, unpleasing to a married ear!" According to old world history, the allusion to the cuckoo on which the word cuckold is based on the nesting habits of certain varieties of this bird. The female of some Old World cuckoos lays their eggs in the nests of other birds, leaving them to be cared for by the resident nesters. This parasitic tendency has given the female bird a figurative reputation for unfaithfulness as well. Hence in earlier English literature the word is used to designate a husband whose wife has wandered off like the female cuckoo. Therefore, not only has Shakespeare created a poem with meter, rhyme, and imagery, he has also added a bit of humor! ...read more.

Rather they are sitting still in one spot to keep warm. Marian's nose is red and raw from her cold, her coughing, and perhaps blowing her nose. This description reflects the aggravation of having a cold and feeling the pain of rubbing your nose raw. A great use of imagery. The last set of lines in each paragraph feels the reader with the last sense of imagery, sound. At the end you hear the roasted crabs hissing in the bowl for some type of stew or soup that will soon be ready. In addition, you also hear the song of the nightly owl "'Tu-whit, tu-who!'" a merry note. Inversely, the owl's note is not merry, it two is cold! Nature is statuesque like the frozen icicles; animals are trying to conserve every bit of heat. Therefore the sound of the owl is somewhat eerie. Judging from an overall perspective, the two poems are a dichotomy of two worlds, the dying and rebirth of nature. Their opposite attraction is common in literature today and will never grow old. Shakespeare uses interesting methods to bring across the importance of these two seasons. ...read more.