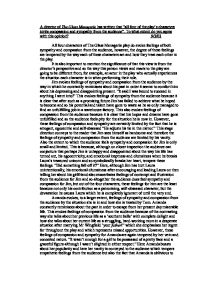 A director of The Glass Menagerie has written that &amp;#147;all four of the play&amp;#146;s characters invite compassion and sympathy from the audience&amp;#148; - To what extent do you agree with this opinion?

A director of The Glass Menagerie has written that "all four of the play's characters invite compassion and sympathy from the audience". To what extent do you agree with this opinion? 9/3/03 All four characters of The Glass Menagerie play do evoke feelings of both sympathy and compassion from the audience, however, the degree of these feelings are tempered by the way each of these characters act and how they treat each other in the play. It is also important to mention the significance of that this view is from the director's perspective and so the way this person views and reacts to the play are going to be different from, for example, an actor in the play who actually experiences the situation each character is in when performing their role. Jim evokes feelings of sympathy and compassion from the audience by the way in which he constantly reminisces about his past in order it seems to comfort him about his depressing and disappointing present. "It said I was bound to succeed in anything I went into!" This evokes feelings of sympathy from the audience because it is clear that after such as a promising future Jim has failed to achieve what he hoped to become and so his potential and talent have gone to waste as he as only managed to find an unfulfilling job in a warehouse factory. ...read more.

with Tom's remark that she is 'an ugly, babbling, old witch' and childishly reacts by saying she is 'not speaking until you apologize'. Here the audience witnesses that because Amanda is vein and values beauty more than anything, she is deeply hurt by this remark. This does evoke feelings of sympathy from the audience for Amanda; however, these are largely tempered by her childish reaction and lack of concern for Laura. To conclude, I think the emotive feelings of sympathy and compassion felt for Amanda are to a much larger extent than those felt for Jim which is mainly because of her false sense of reality and the hope she lives in that a gentlemen caller will one day come and rescue her from this terrible situation, however, they are to a lesser extent than felt for Tom and Laura because although Amanda has endured a lot of hardship, suffering and is desperately unhappy with her life at the moment, she has previously lived a wonderful life and thoroughly enjoyed her youth in 'Blue Mountain' being popular with up to 'seventeen gentlemen callers in one day!' visiting her whilst Tom and Laura have never really had the opportunity to be as free and happy as she was. ...read more.

she feels it better to keep lying to her mum for months rather than face her or go back to the college. Also, Laura evokes compassion from the audience by her role in the household of trying to maintain and emotional balance and it is often herself who gets hurt the most when Tom and Amanda argue but again some of these feelings are tempered by the way Laura acts by not taking her opportunities like the Business College course which would have relieved a lot of strain from Amanda and Tom. Although there is no evidence of Laura being unhappy, depressed and discontent her situation does evokes sympathetic feelings from the audience as she has no friends and so cannot possibly be content. In conclusion, I agree this far that the character Laura, from a director's point of view, is the character that invites the most compassion and sympathy from the audience. However, an actress playing Laura may feel that Laura does not because they would have experienced Laura from a different perspective. Experiencing the performance of the play myself, I can imply that Laura evokes the most compassion and sympathy out of all four characters but Tom also evokes to a similar extent these feelings by the way he explicitly expresses his unhappiness to the audience. ...read more.