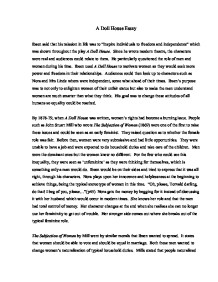 A Doll House Essay Ibsen said that his mission in life was to "Inspire individuals to freedom and independence" which was shown throughout the play A Doll House. Since he wrote modern theatre, the characters were real and audiences could relate to them. He particularly questioned the role of men and women during his time. Ibsen used A Doll House to motivate women so they would seek more power and freedom in their relationships. Audiences could then look up to characters such as Nora and Mrs Linde whom were independent, some what ahead of their times. Ibsen's purpose was to not only to enlighten women of their unfair status but also to make the men understand women are much smarter than what they think. His goal was to change these attitudes of all humans so equality could be reached. By 1878-79, when A Doll House was written, women's rights had become a burning issue. People such as John Stuart Mill who wrote The Subjection of Women (1869) were one of the first to raise these issues and could be seen as an early feminist. ...read more.

"Men do not want solely the obedience of women, they want their sentiments." Ibsen showed that this wasn't always the case, as although Nora was obedient, she wanted something different. Many women would have been in this situation and the play gave them the courage to say it. Women of this time were only educated in how to be attractive to men and to be ladylike. By not having the same opportunities to men, women found out they were not reaching their full potential and didn't feel complete, like Ibsen's Nora. "What is now called the nature of women is an eminently artificial thing-the result of forced repression in some directions, unnatural stimulation in others." The idea of being intellectual was suppressed and men took their dominance as second nature. Torvald was a typical example where he was controlling and degrading. "Nora, Nora, how like a woman!...you know what I think about that." (p44). Ibsen made Nora and Mrs Linde a role model in which the women of his society could look up to. ...read more.

Ibsen achieved his goal for he was a great inspiration to many people. It was said that a young German actress who played Nora "opened the door to a whole new world for German women." This would be the case worldwide. Henrik Ibsen wrote many plays, which were controversial, as they dealt with issues many people were too scared to talk about. He achieved his goal of inspiring people to search for freedom and individuality to some extent, especially in woman's rights. A Doll House is known worldwide and has made an impact on a lot of people. Characters such as Nora and Mrs Linde were role models for women in that time as they were strong and willing to stand up for themselves. They were unlike the stereotype in which women were made into and took responsibility for their actions. The play would make people think and discuss these roles of men and women and even question the values of society. Ibsen hoped he would make women realise they deserve a choice as to whether they want to marry and to be equal with men. ...read more.