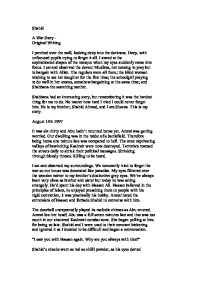 Shahid A War Story - Original Writing I perched over the wall, looking deep into the darkness. Deep, with unfocused pupils trying to forget it all. I stared at the sophisticated shapes of the mosque when my eyes suddenly came into focus. I sat and observed the devout Muslims, not coming to pray but to bargain with Allah. The regulars were all there; the blind woman wishing to see her daughter for the first time; the schoolgirl praying to do well in her exams, somehow bargaining at the same time; and Shahbana-the searching mother. Shahbana had an interesting story, but remembering it was the hardest thing for me to do. No matter how hard I tried I could never forget him. He is my brother, Shahid Ahmed, and I am Sheeza. This is my story. August 14th 1997 It was six-thirty and Abu hadn't returned home yet. Ammi was getting worried. Our dwelling was in the midst of a battlefield. Therefore being home one minute late was compared to hell. The once captivating valleys of bewitching Kashmir were now destroyed. Terrorists roamed the streets daily to shriek their political messages. Shrieking through bloody throats. Killing to be heard. I sat and observed my surroundings. We constantly tried to forget the war so our house was decorated like paradise. My eyes flittered over the wooden mirror to my brother's distinctive grey eyes. We've always been very close as brother and sister but today he was acting strangely. He'd spent his day with Hassan Ali. Hassan believed in the principles of Islam, he enjoyed preaching them to people with his rigid conviction, it was practically his hobby. ...read more.

Tariq ran towards her and put his arm around her, I ran to put my arm on her other shoulder "I've already lost your father and your brother, please don't make me lose the only person I have left" We both hugged her tightly and decided to overlook it for now ***** After Abu and Shahid left the family, Ammi and I were unable to live in Kashmir without men around. At that moment Hassan's family adopted us into theirs and we grew up with them around. Ammi did not enjoy being trapped into Hassan's world but there was no other alternative so we accepted it and stayed with them. Ammi always insured though that our beliefs on Islamic principles never became as extreme as Hassan's. "Sheeza, go back to sleep, please" That's Shamaila, Hassan's sister that I live with. She's right I need to sleep. ***** "Wake up Sheeza! Ammi has some important news for you and Tariq" Shamaila screeched. My eyes slowly fluttered open thinking of what this news may be and the moment I remembered I leaped out of bed and raced my shadow down the steps to see Tariq, Hassan and Ammi all seated together waiting for my arrival. Tariq looked quite confused but once seeing me he looked calmed. Hassan had a wide grin on his face and smiled once I walked in. "Sheeza, sit" I looked befuddled at this canine command but did as my mother demanded. "I have spent my entire evening examining Tariq's proposal and have come to my final decision. I have spoken to Hassan about the worst scenarios and am convinced you are in good hands. ...read more.

I looked at him very confused. Shahid looked very apologetic about something. I carried on looking at him quite puzzled. "Shahid, What've you done?" "We came to a huge disagreement and he isn't right for you" "Oh now my little brother that walked out of my life seven years ago is going to tell me how to life my life when he doesn't know how to live his own" Shahid leapt to his feet. I could see I'd touched a nerve "You think you're so special and amazing? Tariq's dead! And I killed him!" I started laughing, Shahid used to always mess with me as children, and it was our unique way of bonding "You think I'm joking? I have a very short temper and I would've beheaded you a few minutes ago but you're my sister so I decided against it but that Tariq boy has a lot of nerve. So I beheaded him" It wasn't true, it just couldn't be. Nobody could be that evil. I looked at his face full of anger, full of insanity and jumped up "Tariq!" I cried "Tariq!" I ran into the adjacent room looking for him, shrieking his name as I scuttled through "There's no use" A manic voice behind me said. "He can't here you where he is" "What is your problem Shahid? Why did you take his life? How does his death achieve Kashmiri independence?" Shahid had a response but I was too astonished to listen. Shivers ran down my back as I thought about it. I'd just sacrificed my fianc�e for this madman? My legs could no longer withstand my weight therefore I collapsed onto the floor. No tears came out because I'd drained them all as a child. My blemished eyes closed for the last time. Translation Urdu English Allah God Abu Father Ammi Mother Salvar Kameez Indian dress Bhaji Big Sister ...read more.