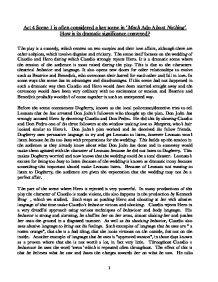 Act 4 Scene 1 is often considered a key scene in 'Much Ado About Nothing' - How is its dramatic significance conveyed?

Act 4 Scene 1 is often considered a key scene in 'Much Ado About Nothing'. How is its dramatic significance conveyed? The play is a comedy, which centres on two couples and their love affairs, although there are other subplots, which involve disguise and trickery. The scene itself focuses on the wedding of Claudio and Hero during which Claudio strongly rejects Hero. It is a dramatic scene where the tension of the audience is most raised during the play. This is due to the characters theatrical behavior and language. It also opens new doors for other relationships to evolve such as Beatrice and Benedick, who overcome their hatred for each other and fall in love. In some ways this scene has its advantages and disadvantages. If this scene had not happened in such a dramatic way then Claudio and Hero would have been married straight away and the ceremony would have been very ordinary with no excitement or tension and Beatrice and Benedick probably wouldn't of come together in such an unexpected way. Before the scene commences Dogberry, known as the local policeman/detective tries to tell Leonato that he has arrested Don John's followers who thought up the plan. Don John has wrongly accused Hero by deceiving Claudio and Don Pedro. He did this by showing Claudio and Don Pedro one of his three followers at the window making love to Margaret, who's hair looked similar to Hero's. Don John's plan worked and he deceived his fellow friends. Dogberry uses persuasive language to try and get Leonato to listen, however Leonato won't listen because he his too busy with preparations for the wedding. This builds up the tension in the audience as they already know about what Don John has done and in someway would make them agitated with the character of Leonato because he did not listen to Dogberry. This makes Dogberry worried and now knows that the wedding could be a total disaster. ...read more.

Benedick does not take sides and because of this, he thinks before he speaks. While watching this angry and physical argument, Benedick studies each of the main people in turn. He suspects Don John, who automatically takes the side of Claudio and does not argue with Hero, but keeps quiet throughout. He knows that Hero is telling the truth and by knowing this asks her whether she really did it, her answer is no, he now knows that something evil is happening and someone has set her up, he guesses Don John has something to do with it and tries to find out more. After the three princes have left and the Friar Francis has listened to all that has been said, he comes up with a plan of which is very dramatic and a rather dangerous one. The plan could end in death where comedy turns into tragedy a bit like the plan used in Romeo and Juliet, which went terribly wrong and ended in tragedy. This kind of plan makes the audience feel uneasy because of the outcome, good or bad. The plan is to act as if Hero has died from shock instantly because of what she has been accused of. Hero is indifferent to this, she says hardly anything, and this shows the uncertainty of it all. Hero faints, which worries Beatrice because of fear she could be dead. However Friar Francis looks and listens to Hero and prevents any more action happening. The idea of this plan is to make Claudio, Don Pedro and Leonato, the three men, who disbelieved her, feel bad about what they said, and start to forget her bad ways and remember her in different ways. This way, they will forgive her for what she has done and her reputation will be cleansed. Many of the major themes in this play are brought into this scene and give it a more serious than comic storyline. ...read more.

Everything in this entire scene is a vital part of the play, which brings it alive with the characters behaviour and subtle language. If Leonato had listened to Dogberry in the first place before the scene took place, his rejection of Hero would not have happened, however without this scene the play would have been quite boring and not so exciting. I think that Don John's character was portrayed well, to give you the sense of hatred or evil, the plan he thought up was one, that would be most loathed by the male characters of Claudio, Don Pedro and Leonato and the general community at the wedding. It is surprising that Benedick is listed as one of the men who feel honour is more important than friends and love. In fact he is the reverse, he does not care much about honour and reputation, but more about his friends and his love for Beatrice. I feel quite strongly about the vengeance and revenge that Beatrice has towards Claudio for suspecting Hero of doing such an evil thing. As she is so close to Hero, she feels that anyone who could hurt Hero in such a way should be punished severely; such is the proposal to Benedick to kill Claudio. However she has to be careful because, she is only Hero's cousin and being a woman, she could lose her home and family, if she were to react with vengeance. I think this scene is brought alive very much, in that strong, physical behavior is used as well as the powerful language in which the characters speak. It portrays each character in a way that you don't expect and gives them a different identity. Hero is one of the few characters who doesn't change her character, but still keeps her honest, innocent, gentle loving behavior in tact. The men have the strongest change in character and it takes a while for the audience to get used to it because their language and behaviour changes. 1 ...read more.