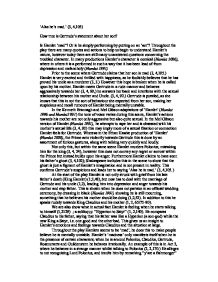 Alas hes mad. How true is Gertrudes statement about her son Hamlet?

'Alas he's mad.' (3, 4,105) How true is Gertrude's statement about her son? Is Hamlet 'mad'? Or is he simply performing by putting on an 'act'? Throughout the play there are many quotes and actions to help us begin to understand Hamlet's nature, however today there are still many unanswered questions concerning the troubled character. In many productions Hamlet's character is comical (Hamlet 2000), where in others it is a performed in such a way that it has been lead of from depression and melancholy (Hamlet 1991) Prior to the scene where Gertrude claims that her son is mad (3, 4,105.) Hamlet is very excited and thrilled with happiness, as he foolishly believes that he has proved his uncle as a murderer (3, 3.) However this hope is broken when he is called upon by his mother. Hamlet meets Gertrude in a rude manner and behaves aggressively towards her (3, 4, 90,) he answers her back and interferes with the sexual relationship between his mother and Uncle. (3, 4, 92.) Gertrude is puzzled, as she knows that this is not the sort of behaviour she expected from her son, making her suspicious and recall rumours of Hamlet being mentally unstable. In the Kenneth Brannagh and Mel Gibson adaptations of 'Hamlet' (Hamlet 1996 and Hamlet1991) the tone of voice varies during this scene, Hamlet's actions towards his mother are not only aggressive but also quite sexual. In the Mel Gibson version of Hamlet (Hamlet 1991), he attempts to rape her and is obsessed with his mother's sexual life (3, 4, 92) this may imply more of a sexual fixation or connection Hamlet feels for Gertrude. ...read more.

These lines give an important prediction to the rest of the play, as the young prince struggles to keep a clear head in order to take revenge. Not only this but further on in the play, Hamlet is seen to the audience as a troubled depressed young man considering taking his life (1,2,136). He contemplates suicide and a countless number of times he repeats the lines: "to be or not to be" (3,1,56). However he does not commit suicide as he still thinks he need to take revenge for his father's death/murder ( ), and expose his uncle the new king, as a murderer ( ). Hamlet is also paranoid, an example of this is when he asks Ophelia "where's your father?" (3,1,130.) Her manner is stiff, henceforward making the prince suspicious and wary of those around him, indeed Hamlet has a reason to be paranoid for he is constantly being watched and observed. However this is not the only example, as Hamlet realises that his Uncle has set out to for Guildenstern and Rosencrantz to spy on him. "To draw him onto pleasures...gather as much as from occasion" (2, 2, 15.) This makes Hamlet's paranoia grow, and for him to believe that there is a conspiracy against him. ( ) At the end of the play, Hamlet shows signs of schizophrenia as he develops a multiple personality and starts talking to himself. (3, 1, 56) it is possible he could be seeing hallucination of his father's ghost who is actually not there. Hamlet has a great fascination with death (1, 4), another symptom of schizophrenia. Despite being warned by Haratio (1,4,72-74) ...read more.

Another character which shows Hamlets cowerdness is prince Fortinbras who invades Denmark at the end ( ). Many could argue that Fortinbras is similar to Hamlet (he also lost his father and his uncle took over the kingdom), but is also somewhat different. Fortinbras is more decisive while Hamlet is rather weary to take revenge of his father's murder ( ). When Fortinbras's troops are moving to take over, Hamlets scolds himself on being so cowardly and does not take any action ( ) Overall from observing Hamlets quotes and behaviour we can tell that he is not always 'mad', as he confesses to Haratio if he acts strange the reasoning behind it was to take revenge and nothing more (1,5,166-180). Also the planning and intellect gone into certain acts of 'madness' show Hamlet may have been 'acting' ( ). However certain acts contradict this, as many symptoms of schizophrenia can be seen in Hamlet ( ), i.e. hallucinations and believing to see his fathers ghost (3, 4,102). At the end of the play it could be said that Hamlet is cured ;( ), as he apologises to Laertes and admits that his loss of control is due to his madness, and contemplates that it was his suffering and procrastination that kept him from killing Claudius sooner. The cause of Hamlets madness may have been branched of from his insanity caused by the king's death (1,2,48) and anger which lead from his mothers bondage with Claudius(1,2).The type of behaviour/madness Hamlet experiences is common today and should be diagnosed with schizophrenia, a disease caused by stress (from the past and present), personal difficulties or other psychological problems, which are often the unexplainable to relatives and friends. ...read more.