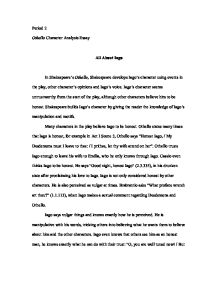 Period 2 Othello Character Analysis Essay All About Iago In Shakespeare's Othello, Shakespeare develops Iago's character using events in the play, other character's opinions and Iago's voice. Iago's character seems untrustworthy from the start of the play, although other characters believe him to be honest. Shakespeare builds Iago's character by giving the reader the knowledge of Iago's manipulation and motifs. Many characters in the play believe Iago to be honest. Othello states many times that Iago is honest, for example in Act I Scene 3, Othello says "Honest Iago, / My Desdemona must I leave to thee: / I prithee, let thy wife attend on her". Othello trusts Iago enough to leave his wife to Emilia, who he only knows through Iago. Cassio even thinks Iago to be honest. He says "Good night, honest Iago" (2.3.335), in his drunken state after proclaiming his love to Iago. Iago is not only considered honest by other characters. ...read more.

(3.3.117), and says that he loves him many times throughout their conversations. Iago leads Othello to believe that his wife, Desdemona is sleeping with his Lieutenant, Cassio. He makes the plans: "After some time, to abuse Othello's ear / That he is too familiar with his wife" (1.3.395-396). Not only manipulative, Iago is sharp tongued and often sarcastic. Iago makes a comment on how trusting Othello is; "The Moor is of a free and open nature, / That thinks men honest that but seem to be so, / And will as tenderly be led by the nose / As a***s are" (1.3.399-402), calling him an "a*s", meaning he is foolish for trusting him. The strongest way that Shakespeare develops Iago's character is through the events that take place in the play itself. He uses each character as a p**n in his plan to destroy Othello and Desdemona's relationship. ...read more.

It is also used when character's are drunk or being vulgar, Iago uses prose when he talks about manipulating people. His speech, generally speaking, is quite eloquent and beautiful. He seems educated and proper. This works in his favor when he manipulates others, it creates and element of trust because his speech makes him seem like a good person. Iago's character is developed through the use of other character's opinions, even if what they believe is false. Everyone believes him to be honest, when he's the exact opposite. Iago uses his speech in his favor, to manipulate other people to get what he wants. He uses his charm to make other's do his dirty work, but in the end it all falls through. Shakespeare's development of other characters as well as his intricate progression of events; help to develop the character that is Iago. These elements help to create what many would call an evil genius, a manipulative mastermind, the fiend of the play. ...read more.

This essay ably outlines Iago as a character, however it tends to narrate rather than focusing on dramatic effect. There is plenty of knowledge shown in this essay, showing Iago's role in the play, however it does not focus on ...

This essay ably outlines Iago as a character, however it tends to narrate rather than focusing on dramatic effect. There is plenty of knowledge shown in this essay, showing Iago's role in the play, however it does not focus on particular techniques of Shakespeare's construct or the dramatic effect on the audience.

The analysis in this essay is sound, however there is plenty of room for improvement. I particularly liked the discussion about Shakespeare's use of Iago's poetic voice and prose, however this paragraph lacks any evidence! If this paragraph had embedded some good quotes and had some close analysis on the language used to back up this point, it would be a perceptive and strong paragraph. But, many of the other paragraphs simply narrate how Iago is perceived by other characters. It is key to note that Shakespeare has constructed the play, and by showing awareness of this you naturally explain why he chooses to make Iago manipulate for example. This essay shows no awareness of Shakespeare's construct or audience response, and so cannot gain top marks. It was a shame to see line references given with quotes as it simply breaks up the flow and is unnecessary. When looking at Shakespeare, I always focus on imagery used. There are tons of examples of Iago's use of imagery having "Michael Cassio on the hip" or calling Othello "an old black ram". Without analysing this imagery, any essay will struggle to gain top marks.

The essay is well structured, having a clear introduction and conclusion. The use of grammar is poor at times, for example "ShakespeareÃ¢â‚¬â„¢s development of other characters as well as his intricate progression of events; help to develop the character that is Iago" shows this essay doesn't know how to use semi-colons.