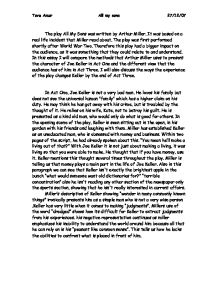 The play All My Sons was written by Arthur Miller. It was based on a real life incident that Miller read about. The play was first performed shortly after World War Two. Therefore this play had a bigger impact on the audience, as it was something that they could relate to and understand. In this essay I will compare the methods that Arthur Miller uses to present the character of Joe Keller in Act One and the different view that the audience has of him in Act Three. I will also discuss the ways the experience of the play changes Keller by the end of Act Three. In Act One, Joe Keller is not a very bad man. He loves his family but does not see the universal human "family" which has a higher claim on his duty. He may think he has got away with his crime, but is troubled by the thought of it. He relies on his wife, Kate, not to betray his guilt. He is presented as a kind old man, who would only do what is good for others. In the opening scene of the play, Keller is seen sitting out in the open, in his garden with his friends and laughing with them. ...read more.

In addition Chris shouts out "you have such a talent for ignoring things!" This, like Keller's uncontrollable love for wealth is shown several times right the way through the play. He doesn't like to get involved with anything that may end up with him in a sticky situation. Keller and Mother have an argument about Chris's latest decision. Mother is infuriated by this proposal and becomes exceedingly irritated by it. All Joe does to attempt to relax her is by saying, "calm yourself". This is also a connection to his way of ignoring what he chooses to ignore. Another important aspect of Joe Keller's character is the fact that he doesn't like to be thought of as in the wrong. He prefers to be the bigger man. This is shown through the stage directions in this act. When Kate stands so does he, in order that he should look taller than his opponent. He is trying to re-establish his role as head of the house hold. Later on, Keller has a monologue in which he talks about the day that he arrived home after his trial. During this section, he continuously points out, "Everyone thought I was guilty, but I wasn't", always covering himself up, leaving no trace of any details. ...read more.

The final point I would like to make is in relation to the suicide of Joe Keller. This too leaves room for interpretation. After all that occurred over the one day, and one night, had Keller actually changed as a person? Or did he kill himself so that he would not have to go to jail? One of his sons also killed himself due to his shame of his father's behaviour; the other was prepared to throw him into a jail cell. His money he could only use to buy a good lawyer, but he could not have access to it whilst locked away. Lastly his wife, according to Keller, was siding with her son. To conclusion, I think that the main contrast between the two acts is, the way in which Joe reacts and communicates with the other characters. This is established in both the words and the stage directions. There are many other aspects of Keller that change throughout the play, yet there are still things that don't change about him at all. Another change that can be argued is whether he regretted his actions. As Arthur Miller said himself "what Keller did was understandable but would never be seen as acceptable." ?? ?? ?? ?? Tova Amor All my sons 27/12/07 ...read more.