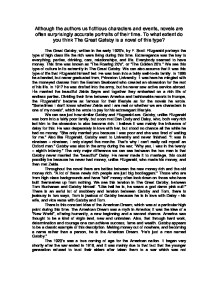 Although the authors us fictitious characters and events, novels are often surprisingly accurate portraits of their time

Although the authors us fictitious characters and events, novels are often surprisingly accurate portraits of their time. To what extent do you think The Great Gatsby is a novel of this type? The Great Gatsby, written in the early 1920's, by F. Scott Fitzgerald portrays the type of high class life the rich were living during this time. Extravagance was the key to everything, parties, drinking, cars, relationships, and life. Everybody seemed to have money. This time was known as "The Roaring 20's", or "The Golden 20's." We see this type of culture in its extremity in The Great Gatsby. We can also assume that it was this type of life that Fitzgerald himself led. He was born into a fairly well-to-do family. In 1896 he attended, but never graduated from, Princeton University. It was here he mingled with the moneyed classes from the Eastern Seaboard who created an obsession for the rest of his life. In 1917 he was drafted into the army, but he never saw active service abroad. ...read more.

Also like Fitzgerald, Gatsby went to University and never finished. "It was in nineteen - nineteen, I only stayed five months. That's why I can't really call myself an Oxford man." Gatsby was also in the army during the war, "Why yes, I was in the twenty - eighth infantry." The only major difference we can see between the two men is that Gatsby never married the "beautiful" Daisy. He never made it to marriage, this could possibly be because he never had money, unlike Fitzgerald, who made his money, and then met Zelda. Throughout the novel there are battles between the new money rich and the old money rich. "A lot of these newly rich people are just big bootleggers." Those who are from high class backgrounds and have "old" money often look down on those who have built themselves up from nothing. We see this tension in The Great Gatsby, between Tom Buchanan and Gatsby himself. ...read more.

The young set themselves free, in particular, the young women. They set out to shock the older generation with their hairstyles and clothes. The short dark bob, famous at this time, skirts and dresses - often wore above the knee, along with "skimpy" beachwear worn in public set out the craze of the "flappers", as they were known. The older generation said "they are born of the devil and carrying the present generation into destruction." The flappers, often went out to all night parties without a man, drove motor vehicles, smoked in public and held men's hands without gloves. Fitzgerald's Great Gatsby is full of this type of character, in particular, Jordan. "She was extended full length at her end of the divan, completely motionless, and with her chin raised a little, as if she were balancing something on it." The narrator, Nick, describes all of these characters with seeming ease. They appear to be all the same person, simple under a different name. ...read more.

The Response to the Question here - a very difficult question, admittedly - suggests a candidate who safely operates at a high B grade for GCSE. There is consistent focus on the question, or at least an attempt to, but ...

The Response to the Question here - a very difficult question, admittedly - suggests a candidate who safely operates at a high B grade for GCSE. There is consistent focus on the question, or at least an attempt to, but on occasion the analysis made isn't tied back to the question or how the points the candidate makes ties back to the period the novel is set in. To answer this question, candidates must have an extensive knowledge of The Roaring Twenties, The American Dream and the degradation of traditional, moral and social virtues that had existed a generation before. The candidate does extremely well to appreciate this, though as stated earlier, the links back to the text and how Fitzgerald actually incorporates such thematic realisms into 'The Great Gatsby' are limited, meaning this becomes a very obvious analysis of the time period, with some emphasis on how it was mirrored in Fitzgerald's novel.

The Level of Analysis is accetpable, though further insight could be given into particular moments like when the candidate talks about the "jealousy" felt between Gatsby and Tom. I would argue that it is not jealousy that these two characters feel, as the other sees the other as a nuisance and an inferior human being (Gatsby despises Tom for being unfaithful to Daisy; Tom despises Gatsby for interfering with what he thinks is a happy marriage).
Where the candidate succeeds is there appreciation of the author and how they integrate it into Gatsby's character. This shows that the candidate has a sound understanding of the author, which exmainers love to see as it is evidence of independent, external research. However, the understanding of Gatsby's character as a reflection of Fitzgerald is slightly skewed - Fitzgerald portrays himself in the novel as a combination of Jay Gatsby AND Nick Carraway - a sort of limbo between two extremes of morality; Gatsby's ostentation and flamboyance mixed with Carraway and his "provincial squeamishness".
The candidate also succeeds when they comment on how The American Dream features in the novel - their commentary on it is the only section where the analysis of the context is seamlessly aligned with the text. To some extent, the candidate achieves this in their paragraph about the changing appearance of women and the liberation they felt after the end of WWII, but the connection to Fitzgerald's text is once again, limited, relagating just two/three lines towards the end of the paragraph to tie the context to Jordan Baker, when she - and Daisy and Myrtle - can be referred to throughout the essay. Doing this would show a consistent reference the text and an ability to tie every point made to a piece of evidence, rather than relying on a few lines towards the end of a paragraph to try and do the hard work.

The Quality of Written Communication is good. The candidate has quoted properly using the correct quotation marks (and not, like some candidates sometimes do, inverted commas). The range of punctuation is limited to full-stops, commas, quotation marks and anything else that the quotes bring in, so their is room for improvement in terms of varying the sentence structure with the use of more complex punctuation (colons, semi-colons). It must also be noted that, when writing the name of the text, their is no abbreviation - 'Great Gatsby' is not an acceptable substitute for the title of this book.