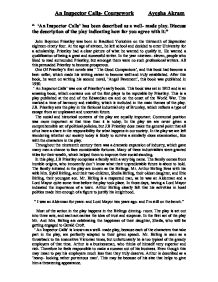 &quot; 'An Inspector Calls' has been described as a well- made play. Discuss the description of the play indicating how far you agree with it.&quot;

An Inspector Calls- Coursework Ayesha Akram " 'An Inspector Calls' has been described as a well- made play. Discuss the description of the play indicating how far you agree with it." John Boynton Priestley was born in Bradford Yorkshire on the thirteenth of September eighteen-ninety four. At the age of sixteen, he left school and decided to enter University for a scholarship. Priestley had a clear picture of what he wanted to qualify in. He wanted a qualification of being a great and successful writer. In the year nineteen- eleven, people who liked to read surrounded Priestley, but amongst them were no such professional writers. All this persuaded Priestley to become prosperous. One Of Priestley's first novels was ' The Good Companions', and this book had become a best- seller, which made his writing career to become well and truly established. After this book, he went on writing his second novel, 'Angel Pavement', this book was published in 1930. ' An Inspector Calls' was one of Priestley's early books. This book was set in 1912 and is an amazing book, which contains one of the first plays to be reputable by Priestley. This is a play published at the end of the Edwardian era and on the onset of the World War. This marked a time of harmony and stability, which is included in the main themes of the play. J.B. Priestley sets the play in the fictional industrial city of Brumley, which reflects a type of escape from an unpleasant and uncertain future. The social and historical contexts of the play are equally important. Communal position was more important at that time than it is today. In the play we are never given a comprehensible set of political policies, but J.B Priestley does make the general point that all of us have a share in the responsibility for what happens in our society. ...read more.

He remains solid and integral as each of them breaks down, and nothing the others do or say can distract him from his purpose. In Act one the family are celebrating the happy engagement party, which is about to take place by having a dinner party. The evening is then interrupted by the arrival of a police inspector named Goole, making enquiries of a young woman who has committed a suicide. When Mr. Birling is shown the photograph, he admits that he knew the girl, and the last time he saw her was two years ago. He had sacked her for being one of the leaders of a strike for higher wages. When Sheila is shown a photograph she soon realizes that she had got the girl sacked from her job as a shop assistant, because of her ill temper and jealousy. When the inspector mentions the girl changed her name from Eva Smith to Daisy Renton, Gerald's reaction made it clear that he too had known the girl. By the end of the act, the inspector knows that each member of the family is clearly linked to the death of Eva Smith/ Daisy Renton. In Act two, tension grows between Sheila Birling and Gerald Croft. Gerald admits that he once made Daisy Renton his mistress, but he had ended the affair some six months later. Sheila is quite angry with Gerald's involvement with the young girl, yet she seems as if she has more respect for Gerald. Whilst Eric is out of the room, Mrs. Birling admits that she too refused to help the poor girl when the girl turned to her organization for help. It is revealed that the girl was pregnant, and then there was a suspicion that Eric may be the father of that unborn child. In Act three, Eric confesses that he knew the girl quite well. He also admits that he stole money from his dad's office to support the girl with her needs. ...read more.

Like Gerald the inspector also used irony in the play. Clearly in act one we can see that the inspector copied the words " very awkward" from Mr. Birling. When the inspector copied these words he echoed them, this tells us that the inspector may be agreeing with Arthur, but as we read on we come to find out that the inspector is hinting out to us that what is going to happen in the future will be very awkward. This means that the inspector will show the Birling family of how accountable they are for what they did to the girl. In the play, when the inspector is talking to each individual character, the audience sees this as if the inspector is talking to us. The theatrical irony here is that we have to ask ourselves, whether we are in a position to judge what has happened when we are probably as guilty of acting irresponsibly and unkindly as anyone on stage. This irony strengthens the audience's feelings that Priestley's type of socialism is not about politics but about caring and loving. The play represents this love in a variety of thoughts, the nature of love and different peoples interpretations of love. Most of the play's success depends upon the dramatic irony which Priestley creates. We see this in the mistaken view that Mr. Birling has about the future. Arthur thinks that his family will get away with everything but his faith in technology and belief in peace misleads him. From here we can see that man's responsibility can be wrong and that a man cannot always be responsible for the family's actions. Overall I think that the play ' An Inspector Calls' is a play more directed for all the audience than the characters in the play and on stage itself. 'An Inspector Calls' is a tender story that shows us how people have to face severe impenetrability's at times, in order to learn and understand correct temperaments and the distinctive of a person you essentially love. ...read more.