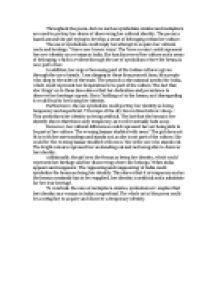 An Unknown Girl. Throughout the poem, devices such as symbolism, similes and metaphors are used to portray her desire of discovering her cultural identity

﻿Throughout the poem, devices such as symbolism, similes and metaphors are used to portray her desire of discovering her cultural identity. The poem is based around the girl trying to develop a sense of belonging within her culture. The use of symbolism could imply her attempt to acquire her cultural roots and heritage. ?I have new brown veins?. The ?brown veins? could represent her new identity as a woman in India. She has discovered her culture and a sense of belonging, which is evident through the use of symbolism where the henna is now part of her. ...read more.

Additionally, the girl sees the Henna as being her identity, which could represent her heritage and her discovering where she belongs. ?When India appears and reappears.? The ?appearing and reappearing? of India could symbolize the henna as being her identity. This shows that it is temporary and as the henna constantly has to be reapplied, her identity is artificial and a substitute for her true heritage. To conclude, the uses of metaphors, similes, symbolism etc. implies that her identity as a woman in India is superficial. The whole act of the poem could be a metaphor to acquire and discover a temporary identity. ...read more.