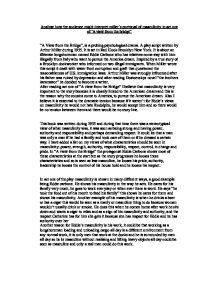 Analyse how the audience might interpret miller's portrayal of masculinity in act one of &quot;a view from the bridge&quot;

Analyse how the audience might interpret miller's portrayal of masculinity in act one of "a view from the bridge" "A View from the Bridge", is a probing psychological drama. A play script written by Arthur Miller during 1955. It is set in Red Hook Brooklyn New York. It is about an illiterate longshoreman named Eddie Carbone who has relatives come stay with him illegally from Italy who want to persue the America dream. Inspired by a true story of a Brooklyn dockworker who informed on two illegal immigrants. When Miller wrote this script it dealt with water front corruption and graft that questioned the reasonableness of U.S. immigration laws. Arthur Miller was strongly influenced after his father was ruined by depression and after reading Dostoevskys novel "the brothers karamazor" he decided to become a writer. After reading act one of "A view from the Bridge" I believe that masculinity is very important to the story because it is closely linked to the American dream and this is the reason why the cousins come to America, to pursue the American dream. ...read more.

He does this when he comes home after work he sits down and wants a cigar to relax and as a sign of his masculinity and authority, and the respect Catherine has for him she gets it because she has respect for Eddie and he has authority over her Another reason for Eddie's masculinity is his work, it could be that working as a longshoreman loading and unloading cargo all day is a different environment from any normal work, it is only men that work at the docks and he is surrounded by men all day so he Is masculine without realising and lifting heavy objects all day could be seen as masculine and only a real man could do this work. Because of these views this could be the reason why Eddie does not like Rodolpho and why the audience sees him as not masculine. Rodolpho could be seen as childish and not masculine. This could be either because he cooks, cleans, helps make dresses and sings, or it could be because he is blond. ...read more.

This shows Eddies obsessive concern for Catherine and shows he could be having feelings for her and is jealous when she has feelings for Rodolpho instead and so tries to discredit him. In conclusion I would say that the audience could interpret Miller's portrayal of masculinity in many different ways, one being that Miller portrayed masculinity in this story in the form of Eddie Carbone. I believe Eddie carbone is meant to represent every man, he is ordinary, decent, hard working and charitable and these are features of masculinity which should be shown in every man but during the story Eddie begins to break down because of his views on masculinity, he has certain urges which he dose not know how to control and begins to show he is not as masculine as he seems this is the cause of dramatic tension in the play and proves my hypothesis to be correct that masculinity in this play is essential to cause dramatic tension and Arthur Miller has portrayed this very well. ...read more.