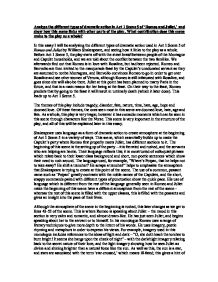 Analyse the different types of dramatic action in Act 1 Scene 5 of Romeo and Juliet, and show how this scene links with other parts of the play. What contribution does this scene make to the play as a whole?

Analyse the different types of dramatic action in Act 1 Scene 5 of 'Romeo and Juliet,' and show how this scene links with other parts of the play. What contribution does this scene make to the play as a whole? In this essay I will be analysing the different types of dramatic action used in Act 1 Scene 5 of Romeo and Juliet by William Shakespeare, and seeing how it links to the play as a whole. Before Act 1 Scene 5, the play starts off with the street brawl between people of the Montague and Capulet households, and we are told about the conflict between the two families. We afterwards find out that Romeo is in love with Rosaline, but had been rejected. Romeo and Benvolio are then invited to the masquerade feast by the Capulet's uneducated servant as they are assumed to not be Montagues, and Benvolio convinces Romeo to go in order to get over Rosaline and see other women of Verona, although Romeo is still infatuated with Rosaline, and goes since she will also be there. Juliet at this point has been planned to marry Paris in the future, and that is a main reason for her being at the feast. On their way to the feast, Romeo predicts that by going to the feast it will result in untimely death (which it later does). This leads up to Act 1 Scene 5. The themes of this play include tragedy, disorder, fate, nature, time, hate, age, hope and doomed love. Of these themes, the ones seen most in this scene are doomed love, hate, age and fate. As a whole, this play is very tragic; however it has comedic moments which can be seen in this scene through characters like the Nurse. This scene is very important in the structure of the play, and all of this will be explained later in this essay. ...read more.

The sonnet is shared by both Romeo and Juliet at the same time, and this signifies their deep bond. Shakespeare probably chose to use this form of poetry in a play as it is very effective; it is about love, and so relates to the romantic mood, and also has a lot of rhyming which, when spoken aloud, gives a very graceful and enchanting sound. This would affect the audience as the sound it gives would emphasize the atmosphere and emotions of the characters. The sonnet contains a lot of religious imagery. For example, Romeo speaks to her, "This holy shrine, the gentle fine is this: my lips, two blushing pilgrims, ready stand to smooth that rough touch with a tender kiss." Juliet, in reply, says, "Good pilgrim, you do wrong your hand too much, which mannerly devotion shows in this; for saints have hands that pilgrims' hands do touch, and palm to palm is holy palmers' kiss." The religious imagery shows the spiritual nature of their love, and the purity toward it. This is because spirituality often goes hand in hand with religion, and religion gives connotations of devotion and purity, similar to Romeo and Juliet's love. As well as this, religious imagery is used to contrast, most notably in the contrast of saints and sinners. The use of these two words ("O, then, dear saint, let lips do what hands do," "Then have my lips the sin that they took,") shows the paradox of the imagery and emphasizes the moral dilemma that Romeo and Juliet face. This dilemma is their constant battle of deciding between loyalty to their family and loyalty to love. The contrasting language also helps to show the deepness of their love. Romeo likens himself to a pilgrim seeking forgiveness for his 'sin' from a saint. As he views Juliet as a 'saint,' he believes that by kissing her his sin will be purged ("Thus from my lips, by yours, my sin is purged,") ...read more.

They feel irritation and anger at Tybalt for his infantile views on Romeo based purely on prejudice, and a sense of warmth for Lord Capulet who, despite him being partially responsible for starting the conflict, is portrayed as a friendly, sociable character who half-heartedly attempts to calm down the younger generation. A variety of dramatic techniques were used to connect to the audience and make the scene more effective. The most prominent is the use of harshly contrasting moods and atmospheres. The change in atmosphere is erratic; it quickly changes from a fast pace, to being relaxed and sociable, to slow and romantic, to angry and violent, back to enchanting and loving and finally to shock and anxiety. The different paces and moods used are very noticeable, and would be even more noticeable when performed on stage. Shakespeare makes this technique work well by constantly changing the type of language used - by varying language from colloquial, eloquent, short, poetic, angry and happy. He also often uses different literary techniques, such as metaphors, similes, imagery, symbolism and motifs. The changing pace and action keeps the audience compelled and interested in the story, and the different language and powerful verbs and adjectives used make the audience empathise with the different characters. Overall, I really enjoyed this scene. I find that it really highlights Shakespeare's ability to interact with the audience and tell a truly gripping tale through excellent timing and emotive language. I think that it is very important in the development of Romeo and Juliet, as the circumstances under which Romeo and Juliet met - in a place Romeo shouldn't have been in the first place - and the simultaneous events which occur affect the overall events and mood of the play. I think that including a sonnet in the scene helped to build the atmosphere and it is a format that the heavy religious imagery worked very well in. The use of symbolism in the scene meant that it had a profound effect on the audience. I think that this was a very fascinating scene. ...read more.