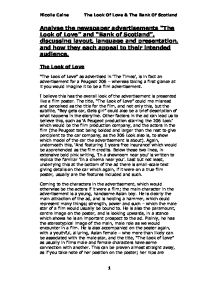 Analyse the newspaper advertisements The Look of Love and Bank of Scotland, discussing layout, language and presentation, and how they each appeal to their intended audience.

Analyse the newspaper advertisements "The Look of Love" and "Bank of Scotland", discussing layout, language and presentation, and how they each appeal to their intended audience. The Look of Love "The Look of Love" as advertised in 'The Times', is in fact an advertisement for a Peugeot 206 - whereas taking a first glance at it you would imagine it to be a film advertisement. I believe this has the overall look of the advertisement is presented like a film poster. The title, "The Look of Love" could me misread and perceived as the title for the film, and not only this, but the subtitle, "Boy gets car, Gets girl" could also be a brief description of what happens in the storyline. Other factors in the ad can lead us to believe this, such as 'A Peugeot production starring the 206 Look' which would be the film production company, and the actors in the film (the Peugeot text being bolded and larger than the rest to give percipient to the car company, as the 206 Look also is, to show which model of the car the advertisement is about). Again, underneath this, 'And featuring 1 years free insurance' which would be apprehended as the film credits. Below these two lines, in extensive bold pink writing, 'In a showroom near you' is written to replica the familiar 'In a cinema near you'. ...read more.

It is simple and to the point appealing to people who'll act on impulse. We don't need an ample story behind the ad; we just need to know that if we buy this car, advantageous things for us will happen. In 5 words, "Boy gets car, Gets girl" the ad and storyline is summed up and told, which brings us to be hooked. The text is also at the apogee of the ad, and is bold, the largest of the ad, in strong contrasting colours, which also grabs our awareness. As for intended audience, through the language and layout of the ad, we can relate the advert to a love story, and so we would presume it is aimed towards young 20-30 year olds who are fairly new to the scene and are looking to vary their interests through many means. This could perhaps also apply to people who are settled in jobs, but are looking for something more prime to make an impression on others. The characters in the ad are also of this age boundary, and so it is imaginable that Peugeot would want 20/30 year olds to put themselves in the position of them and be convinced they can achieve the same. Also this age group would be more likely to be attracted to the characters and so comprehend in buying the car they will not only be more appealing in themselves but others they find fetching will commend them into their social status. ...read more.