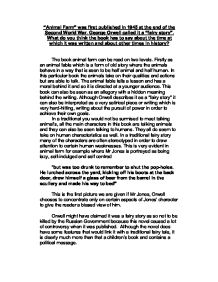 &quot;Animal Farm&quot; was first published in 1945 at the end of the Second World War. George Orwell called it a &quot;fairy story&quot;. What do you think the book has to say about the time at which it was written and about other times in history?

"Animal Farm" was first published in 1945 at the end of the Second World War. George Orwell called it a "fairy story". What do you think the book has to say about the time at which it was written and about other times in history? The book animal farm can be read on two levels. Firstly as an animal fable which is a form of old story where the animals behave in a way that is seen to be half animal and half human. In this particular book the animals take on their qualities and actions but are able to talk. The animal fable tells a lesson and has a moral behind it and so it is directed at a younger audience. This book can also be seen as an allegory with a hidden meaning behind the writing. Although Orwell describes it as a "fairy story" it can also be interpreted as a very satirical piece or writing which is very hard-hitting, writing about the pursuit of power in order to achieve their own goals. In a traditional you would not be surmised to meet talking animal's, all the main characters in this book are talking animals and they can also be seen talking to humans. They all do seem to take on human characteristics as well. In a traditional fairy story many of the characters are often stereotyped in order to draw attention to certain human weaknesses. This is very evident in animal farm for example where Mr Jones is portrayed as being lazy, self-indulged and self centred "but was too drunk to remember to shut the pop-holes. ...read more.

As it spreads rapidly across the region, the song gives the beasts both courage and solace on many occasions. "Beasts of England, beasts of Ireland, Beasts of every land and clime, Hearken to my joyful tiding Of the golden future time." The optimism of the words "golden future time," serves to keep the animals focused on the Rebellion's goals so that they will ignore the suffering along the way. The pigs use a philosophy called 'Animalism' which was a system on thought, which had been brought about by old Major's teachings. The way in which the pigs managed to enforce the thought of animalism on to the animals is by breaking them down into what they called the " 7 commandments" "The 7 commandments 1. Whatever goes upon two legs is an enemy 2. Whatever goes upon four legs, or has wings, is a friend. 3. No animal shall wear clothes. 4. No animal shall sleep in a bed 5. No animal shall drink alcohol 6. No animal shall kill any other animal 7. All animals are equal." The pigs state that these rules must be followed of otherwise they would be breaking they spirit of animalism. In Chapter the animals spend a laborious summer harvesting in the fields. The pigs think of cleaver ways for the animals to use the humans' tools, and every animal participates in the work, each according to his capacity. The resulting harvest exceeds any that the farm has ever known. ...read more.

"Napoleon announced that ha had decided upon a new policy. From now onwards Animal Farm would engage in trade with neighbouring farms." This shows that the pigs had taken full power of the farm. One day, Boxer's strength fails; he collapses while pulling stone for the windmill. The other animals rush to tell Squealer, while Benjamin and Clover stay near their friend. The pigs announce that they will arrange to bring Boxer to a human hospital to get better, but when the cart arrives, Benjamin reads the writing on the cart's sideboards and announces that Boxer is being sent to a glue maker to be slaughtered. The animals panic and begin crying out to Boxer that he must escape. They hear him kicking feebly inside the cart, but he is unable to get out. Contact with humans has becomes acceptable. An example of this is when; Napoleon announces that he has hired a human solicitor, Mr. Whymper, to assist him in conducting trade on behalf of Animal Farm. "A Mr. Whymper, a solicitor living in Whillingdon, had agreed to act as intermediary between Animal Farm and the outside world" At the end of the novel, they cycle of corruption is complete and the story ends as it began with drunkenness and a picture of what can happen when power corrupts. Perhaps you find the ending unsatisfactory, but, if read as a political satire, it is an uncomfortable and frightening look at what could happen and possibly already happened in history. A bleak book, with not exactly a happy ending, a fairy tale with a sting! ...read more.