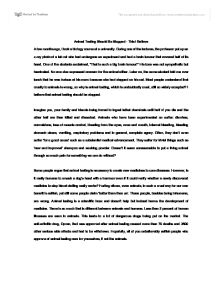 Animal Testing Should Be Stopped, This I Believe.

Animal Testing Should Be Stopped - This I Believe A few months ago, I took a biology course at a university. During one of the lectures, the professor put up an x-ray photo of a lab rat who had undergone an experiment and had a brain tumour that covered half of its head. One of the students exclaimed, "That is such a big brain tumour!" His tone was not sympathetic but fascinated. No one else expressed concern for the animal either. Later on, the same student told me over lunch that he was furious at his mom because she had stepped on his cat. Most people understand that cruelty to animals is wrong, so why is animal testing, which is undoubtedly cruel, still so widely accepted? I believe that animal testing should be stopped. Imagine you, your family and friends being forced to ingest lethal chemicals until half of you die and the other half are then killed and dissected. ...read more.

These people, besides being inhumane, are wrong. Animal testing is a scientific hoax and doesn't help but instead harms the development of medicine. There is so much that is different between animals and humans. Less than 2 percent of human illnesses are seen in animals. This leads to a lot of dangerous drugs being put on the market. The anti-arthritic drug, Opren, that was approved after animal testing caused more than 70 deaths and 3500 other serious side effects and had to be withdrawn. Hopefully, all of you unbelievably selfish people who approve of animal testing care for yourselves, if not the animals. Scientists know that animal testing is not reliable. Up to 90 percent of animal tests are discarded because they are irrelevant to humans. So why do they still do it? When asked, they reply, "It's part of the procedure," or "How else are we going to get an idea of what works and what doesn't?" ...read more.

It is true that this is not a pleasant death but there is no doubt that suffering with deliberately inflicted cancer weeks on end before death is worse. Also, when an animal is killed to be eaten, there is a reason for its death and its body is not being dumped into a rubbish bin on a pile where the rest of its family lays. This is why eating meat is okay but animal testing is most definitely not. This probably isn't the first article you've seen that protests against animal testing and while reading, you were most likely thinking, 'Not again!'. There is indeed a lot of argument on the topic of animal testing but obviously not enough from the opponents because somehow, a group of well educated teenagers who, unlike some adult scientist, have not been 'hardened by the difficulties of life' feel not even a little sympathy when just a few blocks away, an innocent being is being killed painfully for absolutely nothing. ...read more.

There are some good features in this essay; it does manage to present some interesting arguments, however its failure to engage constructively with the opposing view is a major weakness. It fails to define Ã¢â‚¬Å“animal testingÃ¢â‚¬Â in the first paragraph, ...

There are some good features in this essay; it does manage to present some interesting arguments, however its failure to engage constructively with the opposing view is a major weakness. It fails to define Ã¢â‚¬Å“animal testingÃ¢â‚¬Â in the first paragraph, but instead opens with a personal anecdote. It is best to set out clearly in your first paragraph what exactly you will be discussing, and then tell the reader your opinion, backed up with a general summary of what your arguments will be. There is a major lack of organization here as the candidate does not even distinguish between commercial and medical testing until the third paragraph, and there is a major deviation from the subject of animal testing to a discussion of vegetarianism. This is completely irrelevant, and undermines the candidate's argument. With proper planning for your essay, these pitfalls can be avoided.

There is a lot of vitriol here and ad hominem attacks on those who support animal testing. This should always be avoided, because, firstly, it isn't persuasive, and secondly, it comes across as extremely juvenile to the marker. It is better to fairly discuss your opponent's position fairly, and then present an argument to counter that, for example, "while proponents of animal testing often argue ... this is incorrect because..."
ÂWhilst in an exam situation a candidate can 'make up' some facts in their essays, this is not appropriate for coursework, and the candidate has included some extremely questionable factsÂ here to support their argument. The candidate has presented some interesting arguments, e.g. using Opren as an example of when animal testing can go wrong, and has used some devices well, e.g. rhetorical questions. However these are often lost behind what could be described as ranting. Using statistics and using emotive language can be extremely persuasive, however a candidate must be very careful to seem reasonable and measured in their argumentation. The goal of a persuasive essay is not to attack your opponent, but to persuade them.

This essay is written in a rather gushing style and comes across as something rather like a rant. Generally the spelling and grammar is good, although there is room for improvement in places; for example the concluding sentence is jumbled and needs revising.