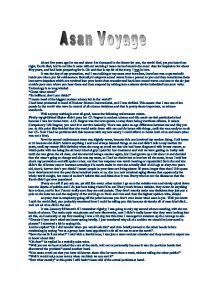 About five years ago for me and about five thousand in the future for you, the world died, yes you heard me right, Earth died, but its not like it came without warning I mean we had known the exact date for implosion for about fifty years, and had been preparing for it. Oh and that is my bit of the story, I was in love. It was the day of my promotion, and I was talking to my mum over intrafone, intrafone was a system built inside you when you hit adolescence. Basically it teleports sound waves from a person to you and then transforms them into nerve impulses which are received into your brain then transformed back into sound waves and sent to the air just outside your ears where you hear them and then respond by talking into a minute device imbedded into your wrist. Technology is so long winded. "Guess what mum!" "Its brilliant, don't you think!" "I mean head of the biggest nuclear science lab in the world!" I had been promoted to head of Nuclear Science International, and I was thrilled. This meant that I was one of ten people in the world who were in control of all science decisions and that is pretty damn important, on science standards. Well anyway nothing is ever all good, hence the following unfortunate events. Firstly my girlfriend Skylar didn't pass her CL Degree in nuclear science and this made me feel particularly bad because I was her home tutor. A CL Degree was the new system, to stop there being worthless citizens. It means Compulsory Life Degree; you need it to survive basically. There was quite an age difference between me and Sky you see. ...read more.

it when you know the world is going to end next week; regardless of the fact that me and her were to be going. Nothing on Earth seemed worth the energy any more, it was frustrating when you were trying to concentrate on a task when all you could think about was world death and mass murder! I knew I wasn't allowed to tell Skylar but nevertheless I did, I don't know whether it is because she is female and can see a bright side to everything or just because she had just spent her first week at home doing nothing as a house wife, but either way she pretty much told me not to worry! How can a guy not worry when he is one of few that know that the world is going to end and nearly everybody on its face is going to be what can only be described as murdered, and seems to be the only one with a problem with it! Moving on, I tried my best to act normal and make the most of the last few weeks of earth but Skylar seemed to find it much less difficult. It was pretty much count down and I went to what would probably be the last official science meeting on earth, it lasted hours. We spent some time talking about what will happen and where all passengers are going to meet, and then spent the other four hours listing everybody who was going on the trip. After trailing through the celebrities and most of the way through the civilians we all went for a tea break. When the meeting resumed we continued wading through the process and finally got onto the best people, us. ...read more.

Suddenly Sky's ship slowed too and then stopped just very gently touching ours, but that was all we needed to push us away. We started flying at speeds unimaginable up into space, and everything was pulled by the positive G's to the bottom end of the ship pushing me against the window, so I had no choice other than to watch Sky's ship literally fall out of the sky and get sucked into the most amazing, most heart breaking yet still extraordinary thing I have ever seen. She was pulled back by the force of the world imploding, and was gone forever... But I swear to this day that I heard her say "goodbye" "Hello, and welcome to the 2 25 G 56 Adaptor, your voyage today will take you far distances." Every morning the same boring computerised voice would ring out at every station as I travel to work. On board a cramped little short hall space jet, with shiny silver walls, plastic windows about 6 inches thick and uncomfortable metal seats made of recycled Grenium. This actually is quite a coincidence seeing as I work for Tistanic (the new Sony) and as you may have imagined I have the worst job in the business, yes you guessed it, I am one of the poor idiots who are sent out into space to collect grenium from passing asteroids and such like, you see you can't get Grenium on Asan. Other than there being new materials on our new Earth there are also many other changes, Gold is worthless and there are new laws such as, you are not permitted to have children until you are thirty years old! (Birth control systems, not so new). Children these days don't understand why most of the people 35 plus are depressed, but we all know and share the same disability of looking forward to a future of widowhood. By Natasha Coleman ...read more.