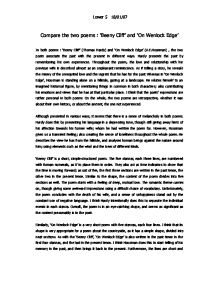 'Beeny Cliff' and 'On Wenlock Edge'

Compare the two poems : 'Beeny Cliff' and 'On Wenlock Edge' In both poems : 'Beeny Cliff' (Thomas Hardy) and 'On Wenlock Edge' (A.E.Housman) , the two poets associate the past with the present in different ways. Hardy presents the past by remembering his own experiences. Throughout the poem, the love and relationship with his previous wife is described almost as an unpleasant reminiscence. As if telling a story, he reveals the misery of the unrequited love and the regrets that he has for the past. Whereas in 'On Wenlock Edge', Housman is standing alone on a hillside, gazing at a landscape. He relates himself to an imagined historical figure, by mentioning things in common in both characters; also contributing his emotions and views that he has at that particular place. I think that the poets' expressions are rather personal in both poems. On the whole, the two poems are retrospective, whether it was about their own history, or about the ancient, the one not experienced. Although presented in various ways, it seems that there is a sense of melancholy in both poems. Hardy does this by presenting his language in a depressing tone, though still giving away hints of his affection towards his former wife; whom he had written the poem for. However, Housman gives us a transient feeling; also creating the sense of loneliness throughout the whole poem. He describes the view he has from the hillside, and analyses human beings against the nature around him; using elements such as the wind and the trees of different kinds. ...read more.

Moreover, not only does he carry on using a lot of alliterations, but he also uses some assonance. For example, there is the triplet, 'riding' 'high' 'bright' in line 2 of the poem. The 'I' sound, and the word 'high' in the middle creates the sense of height. Hardy intentionally does this to explain his feelings of love. When, he and his wife were in love, Hardy tells us that they felt as though they were high up, above the sky. He mentions 'nether sky', as if there was another, lower sky below them. Equally, 'On Wenlock Edge', uses a lot of stylistic devices. One of the obvious ones would be the alliteration, such as 'forest fleece' in line two. I think that Housman places alliteration there in order to emphasise the abundance of trees in the forest. Consonances used in this poem are not as obvious; however they are repeated a few times. The phrase 'plies the saplings double' has a little significance, as it shows the effects of the 'gale', the main element of the poem. I think the sound 'ply' in both words gives quite a strong impact and helps to visualise the young trees being bent by the winds. Personification is used quite often in both of the poems. In 'On Wenlock Edge', Housman shows one in the first stanza. 'the Wrekin heaves'. The 'Wrekin', a hill or a mountain, is described as a moving object. However, this is only used to describe blustery scenery; as the wood, covering the mountain would look as if the mountain is moving. ...read more.

The 'gale of life', could mean that the wind is blowing with such great force, that Housman feels as if it is almost alive. As there is evidence to how violently he thought the trees were shaken, I think he was just trying to emphasize the fact that it was a blustery day. He says 'His forest fleece the Wrekin heaves', meaning the trees are shaken so much in order to make the mountain look as if it is moving around. Not only that, but he also mentions that young trees are bent and that the wind would blow even through trees on a slope. In 'Beeny Cliff', I think Hardy has a hidden meaning of the poem. As he describes how beautiful the view is, standing on 'Beeny Cliff', he continues extremely until it becomes almost surreal and the cliff is placed in a fairy story, with such attractive sea beneath. Evidence of this can be found throughout the poem, such as 'opal ... sapphire of that wandering western sea' He compares the sea with jewels, as if the sea is sparkling, or even illuminating. Instead of an imaginary place in his thought, I think Hardy really is describing how wonderful and charming his wife was. Although neither of these poems have personal significance, they have had a strong impact. I think both poets express their feelings in a way that almost makes me feel sympathy towards them. I have identified the deep connection between the poets and the content of their poems, and I think that is the most significant part of poetry. ?? ?? ?? ?? Lower 5 18/01/07 ...read more.