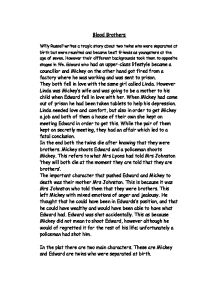 Blood Brothers Willy Russell writes a tragic story about two twins who were separated at birth but were reunited and became best friends as youngsters at the age of seven. However their different backgrounds took them to opposite stages in life. Edward who had an upper-class lifestyle became a councillor and Mickey on the other hand got fired from a factory where he was working and was sent to prison. They both fell in love with the same girl called Linda. However Linda was Mickey's wife and was going to be a mother to his child when Edward fell in love with her. When Mickey had come out of prison he had been taken tablets to help his depression. Linda needed love and comfort, but also in order to get Mickey a job and both of them a house of their own she kept on meeting Edward in order to get this. While the pair of them kept on secretly meeting, they had an affair which led to a fatal conclusion. In the end both the twins die after knowing that they were brothers. Mickey shoots Edward and a policeman shoots Mickey. This refers to what Mrs Lyons had told Mrs Johnston 'they will both die at the moment they are told that they are brothers'. The important character that pushed Edward and Mickey to death was their mother Mrs Johnston. This is because it was Mrs Johnston who told them that they were brothers. This left Mickey with mixed emotions of anger and jealousy. He thought that he could have been in Edwards's position, and that he could have wealthy and would have been able to have what Edward had. Edward was shot accidentally. This as because Mickey did not mean to shoot Edward, however although he would of regretted it for the rest of his life; unfortunately a policeman had shot him. ...read more.

This shows that Mickey had worries and responsibilities towards his family. On the other hand, Edward did not because he had money which gave him power. This meant that he was able to do anything that he wanted. In the play it is shown that people from working-classes did not get better educations in schools and also they did not get a chance to go to university. This was because going to university cost a fortune for people who lived in a working-class lifestyle. It also shows in the play that people who lived working-class lifestyles got jobs when they left school. This was because they had to get jobs in order to provide for their families. I think the play tells us that class is important in Britain. This is because it shows that which ever people are form upper-class backgrounds they are respected by other and have got power where as people who are form working-class backgrounds they are not respected at all, also they can be fooled or mistaken because they are not highly educated as rich people. I recent times I think this has only changes slightly. This is because people who are from working-class are still treated the same as upper-class children. This is because they are highly educated and can go to university if they wish to and become someone who is highly educated and respected. However I think that this has only changed slightly because some people from working-class backgrounds are treated different from people who are from upper-class backgrounds. An example of this would be that if a pop star and a factory worker are living in the same hotel, the hotel would make sure that the pop star would be comfortable in their room and would keep on checking if they needed anything or if they had any problems. However they would not be giving the same treatment to the factory worker as they would be giving to the pop star. This is because of class. There fore I think that class has only slightly changed in Britain. ...read more.