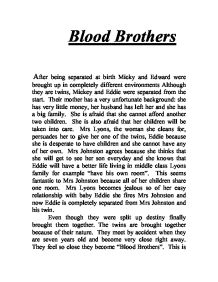 Blood Brothers After being separated at birth Micky and Edward were brought up in completely different environments Although they are twins, Mickey and Eddie were separated from the start. Their mother has a very unfortunate background: she has very little money, her husband has left her and she has a big family. She is afraid that she cannot afford another two children. She is also afraid that her children will be taken into care. Mrs Lyons, the woman she cleans for, persuades her to give her one of the twins, Eddie because she is desperate to have children and she cannot have any of her own. Mrs Johnston agrees because she thinks that she will get to see her son everyday and she knows that Eddie will have a better life living in middle class Lyons family for example "have his own room". ...read more.

The twins first meet when Eddie offers Mickey a sweet. Mickey is amazed by this kind gesture. He did not hesitate to take one. Already nurture has made a slight difference at such a young age because Eddie has sweets and can afford to share which stuns Mickey because he has to keep all his sweets away from his family. The Johnston children do not get many sweets. The difference in society has made Eddie more generous than Mickey, but this is only because he has to chance to whereas Mickey has to saver his sweets. Even though they had completely different upbringings they still got in to the same mischief. The twins experience a completely different reaction when they are shooting a window in the park and get caught by the policewoman. ...read more.

Due to the different environments that they grew up in, Eddie is ensured a successful career, because he had money to go to university and would improve his father's factory when he died. On the other hand, Mickey was almost guaranteed to get a low paid job with long hours because of his deprived environment. Eddie has always been naive throughout the play and has not experienced many difficulties whereas Mickey has always been underprivileged money and unable to have the chance to go to university. The High unemployment rate also played a part in Mickey's life long struggle even when he got out of prison and planned to get his life sorted out he was knocked back down by the unemployment and when he did get a job it was given to him by Edward and this is what might of pushed him over the edge. ?? ?? ?? ?? ...read more.