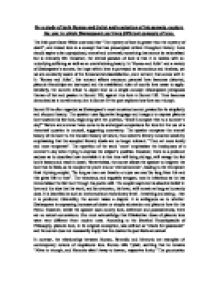 By a study of both Romeo and Juliet and a selection of his sonnets (Sonnet 18, Sonnet 129 and Sonnet 130), explore the way in which Shakespeare portrays different concepts of love.

By a study of both Romeo and Juliet and a selection of his sonnets, explore the way in which Shakespeare portrays different concepts of love. The Irish poet Oscar Wilde once said that "The mystery of love is greater than the mystery of death", and indeed love is a concept that has preoccupied writers throughout history. Love should aspire to be unprejudiced, eternal and universal; something that cannot be rationalised but is intensely felt. However, the eternal paradox of love is that it is riddled with an underlying suffering as well as an overwhelming beauty. In 'Romeo and Juliet' and a variety of Shakespeare's sonnets, the hope within love is portrayed as harmonious and timeless, yet we are constantly aware of the fundamental dissatisfaction, even torment, that comes with it. In 'Romeo and Juliet', this torment affects everyone: parental love becomes distorted, platonic friendships are destroyed and the established rules of courtly love cease to apply. Similarly, the sonnets refuse to depict love as a simple concept: Shakespeare juxtaposes themes of l**t and passion in Sonnet 129, against true love in Sonnet 130. Time becomes demonised as a mortal enemy, but in Sonnet 18 the poet explores how love can triumph. Sonnet 18 is often regarded as Shakespeare's most renowned sonnet; praised for its simplicity and eloquent beauty. The speaker uses figurative language and imagery to express platonic love towards his fair lord, beginning with the question, "Shall I compare thee to a summer's day?" ...read more.

The alliteration provides a flow which symbolises the graceful walk of a goddess, but this is stilted by the semicolon as he goes on to talk about his mistress, implying their relationship to be honest and comfortable. The couple seem to have an understanding of what their love is; something that the sonnets to the Fair Lord lack. Similarly, sincerity is evident in the language between Romeo and Juliet when they first meet in Act 1 Scene 5. Shakespeare uses religious imagery to capture this moment, as opposed to the brutal honesty in sonnet 130. Romeo compares Juliet to a "holy shrine" and Shakespeare extends this metaphor with the phrasing "dear saint", which not only portrays his love for her as spiritual and untainted, but also petrarchianises his words, as comparing her to a saint elevates her to a goddess. To a modern audience, this would seem a customary comparison, but to an Elizabethan one, it would have been shocking: comparing a lover to a saint was deemed sacrilegious and disrespectful to the Gods. Thus, even religion and the Gods are against Romeo and Juliet's love. The stagecraft of their first interaction is in the form of a typical Shakespearean sonnet: 14 lines of iambic pentameter concluding with a rhyming couplet. The meter resembles a heartbeat and one could argue that the intensity of their love is heightened for the audience as a result of this. ...read more.

In this sense, the 'villains' of this play, i.e. the parents and even Paris, do have genuine love for the children. In fact, although the audience is biased and cannot support Paris, we sympathise with him since he dies for Juliet. His love cannot compare to that of Romeo's, but it is still a form of love. In conclusion, Shakespeare presents the concept of love, in both the play and the sonnets with a myriad of faces: it is all at once beautiful, hopeful, angry, lustful and illicit. Nonetheless, none of the texts despair of it: it remains a preoccupation, "an ever fixed mark", within Shakespeare's body of work, and humanity itself, which is why the texts resonate within a contemporary audience. Interestingly, Shakespeare also allows potent hatred to permeate throughout the play and sonnets, which ostensibly serve to undermine the concept of love, but in truth, heightens it. The struggle to find and maintain love is realistically associated with all types of love, yet in the body of his work that has been examined here, it has been achieved. 'Romeo and Juliet' remains to this day, the most renowned and beautiful tragedy of all time. Shakespeare uses the lovers to end the feud between their parents and the sonnets to express his attitudes towards love as eternal and never ending, thus exploring the idea that as difficult and confusing as love can be ultimately one should never give up on it. ?? ?? ?? ?? ...read more.