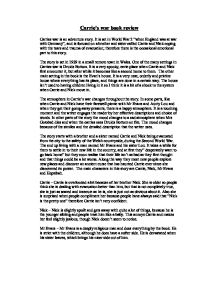 Carrie's war book review Carries war is an adventure story. It is set in World War 2 "when England was at war with Germany", and is focused on a brother and sister called Carrie and Nick coping with the tears and trauma of evacuation; therefore there is the occasional emotional part to this story. The story is set in 1939 in a small remote town in Wales. One of the many settings in Carries war is Druids Bottom. It is a very spooky, eerie place when Carrie and Nick first encounter it, but after while it becomes like a second home to them. The other main setting in the book is the Evan's house. ...read more.

The mood changes because of the similes and the detailed description that the writer uses. The story starts with a brother and a sister named Carrie and Nick being evacuated from the city to the safety of the Welsh countryside, during the Second World War. The end up living with a man named Mr Evans and his sister Lou. It takes a while for them to settle in to their new life in the country, and at first they" desperately want to go back home" but they soon realise that their life isn't as bad as they first thought and that things could be a lot worse. Along the way they meet new people explore new places and discover an ancient curse that has haunted Carrie ever since she discovered its power. ...read more.

He is strict with the children, although he does have a softer side. He is devastated when his sister leaves, which brings his nicer side out of him. Hepzibah - Hepzibah is a very superstitious woman and believes many myths and legends. She took one of these myths too far and ultimately led Carrie to believe that she was responsible for Druids Bottom burning down. I would give Carrie's War an eight out of ten. It was a gripping read and had you hooked from start to finish. Carrie's War really takes you back to what life would have been like in 1939 and through all the ups and downs of being as a war time evacuee. Nina Bawden has made the book come to life with its strong characters and vivid description to what life would have been like during those times. ...read more.

Three stars - includes the essential information about characters and setting with some analysis of the mood and plot.
Would benefit from a more coherent structure and some work on expression.